Michele and I recently had the wonderful opportunity of observing playing and learning. Outside of our second story apartment is our parking lot and driveway which has several low spots that create some substantial puddles when we get a steady rain. We had a three-day rain streak and on each of those days our afternoons brought the sounds of young children at play. About ten 3-4-year-old students and their two teachers showed up each afternoon having identified a great spot to play and learn. Dressed for rain and wearing boots, they marched, kicked, ran, and splashed through the puddles. Their creativity emerged as the explored different movements around and through the puddles. Their teachers were in an observant role the whole-time, sharing comments with each other.

On the third day, one of the students discovered a two-inch-high/three-inch-wide cement divider between the driveway and parking spaces. He quickly identified that it made a great balance beam and began exploring his skill at moving from one end to the other and trying different stepping styles. In short order several of his colleagues joined him on the “beam.” After a while, one student started a new game, “knocking classmates off the beam.”  Michelle and I were in a total observer/wondering role as we watched both teachers observe and not interfere in the game for quite a while. We pondered what they were considering as they observed. After several minutes, one of the teachers leaned over to the ear of the “pusher” and a “pushee”. Several other students continued experimenting with balancing until the class headed either back to school or another play/learning spot. 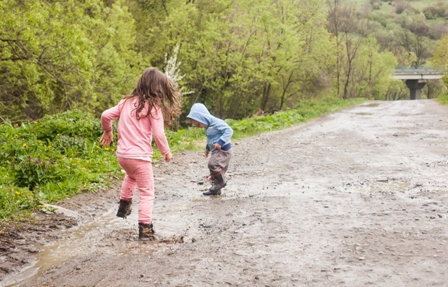 I wish that I knew the teachers. I’d love to have a post conference and hear their thinking about what they observed, what meaning they drew from it, and what debrief or new experience they were planning to increase learning. I am aware of some of the independence that the Swiss and Germans build into their early childhood programs. Recently a teacher in a bilingual international school was sharing her excitement teaching in a Forest Kindergarten program and how it created so many play, learn, and observe opportunities.

Eliza Minnucci, a kindergarten teacher in Quechee, Vermont spends one day a week with her students outside — for the entire school day. It’s called Forest Monday. (Listen to NPR interview here.)

There are very few rules in the woods. Take care of yourself, take care of others, don’t wander too far away; that’s pretty much it. The goal is to let kids experience independence and help them learn the self-regulation skills that are so important to becoming a successful adult.

Minnucci was inspired by the Forest Kindergarten in Switzerland where the forest is the classroom. (See a Swiss Forest School and meet the students later as 5th graders.  Video: How about watching High School students play/work /learn?)

Frisco, Texas (ISM) mentorship program is a challenging, weighted course for 11th and 12th-grade gifted students who focus their study on a topic or career of their choice.

The course culminates on ISM Final Presentation Night in May during which students individually present their original product creation and what they learned from their ISM experience. The hope is that students gain a better understanding of which career path or major to pursue after graduation.

Here are some students past projects: (From a blog by Julie Martin)

Ashley learned a great deal about congenital heart defects in both infants and adults during her first ISM year.  During her senior year, she studied the humanitarian side of medicine and completed her ISM journey with her Heart-for-a-Heart campaign.  Partnering with The HeartGift Foundation, Ashley set out to raise $15,000 to help pay for a child’s heart surgery.  Ashley organized fundraisers at her school, spoke to parent and community groups, and presented at corporate meetings to garner corporate sponsorships.  She did get a matching corporate sponsorship and by the end of campaign, Ashley raised approximately $30,000 – almost enough to pay her share of the expenses for two children to have congenital heart defects repaired here in the US.For her hard work, Ashley got to meet Eva when she arrived at the airport from Honduras, play with her pre-surgery, observe the doctor repair Eva’s heart in the OR, and visit Eva at her host family’s home as she recovered.  And she did this as a student in ISM.

Jeff created and programmed a sensor that can be installed on traffic lights.  When there is a flashing yellow turn signal, the sensor will light up if there is oncoming traffic that would prevent a safe turn.  The city of Frisco allowed Jeff to install and test his product at a busy intersection here in Frisco.

Luke completed extensive research to determine the best city in which to open a new Tiffany and Co.  Once New Orleans was determined as the target city, Luke found a mall close to the French Quarter that had leasing space suitable for the store.  Luke then designed the entire layout of the store, and his idea was shared with the corporate office.  One year later, Tiffany and Co. opened a store in New Orleans based on Luke’s research and recommendation.

Can you imagine watching these students play, work, and learn? How can we create many more opportunities for students to play, work, learn?  There are many places between pre-school and gifted high-school programs for similar opportunities. Do we have the courage to push from the classroom walls?