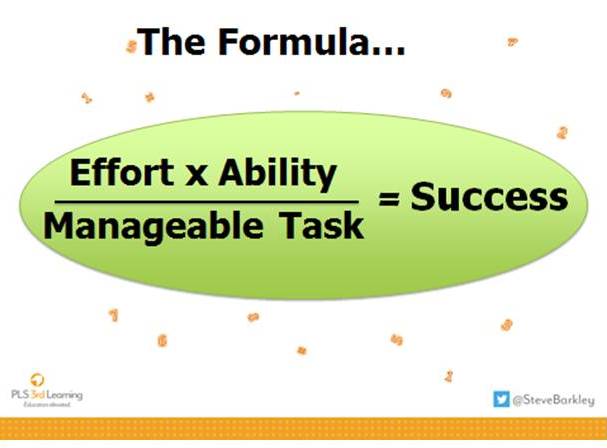 I found a lot of students were unaware of the formula. Many thought the formula was ability equals success. They had a tendency to look around the room and spot students who were being successful and say, “I wish I had that ability.“

Then there were some students who thought it was an addition formula: ability plus effort equals success. In other words, if I took my ability, and I added some effort, I could get a little bit more success.

The point that I wanted to drive home to students was that effort was really a multiplier: effort multiplies your ability. When I put in effort and my ability increases, I get continued pay off from it. It’s like when we had compound interest at the bank. You could put money in the bank and it actually grew as it sat there. When I invest effort and I grow my ability, that ability continues to have payoff, even after I stopped putting in the effort. Invest effort now. Drive up my reading stamina and my comprehension skills set and even when I stopped the effort, those skills I gained continue to pay off for me. They will pay off in courses that weren’t necessarily a reading or a language arts course. 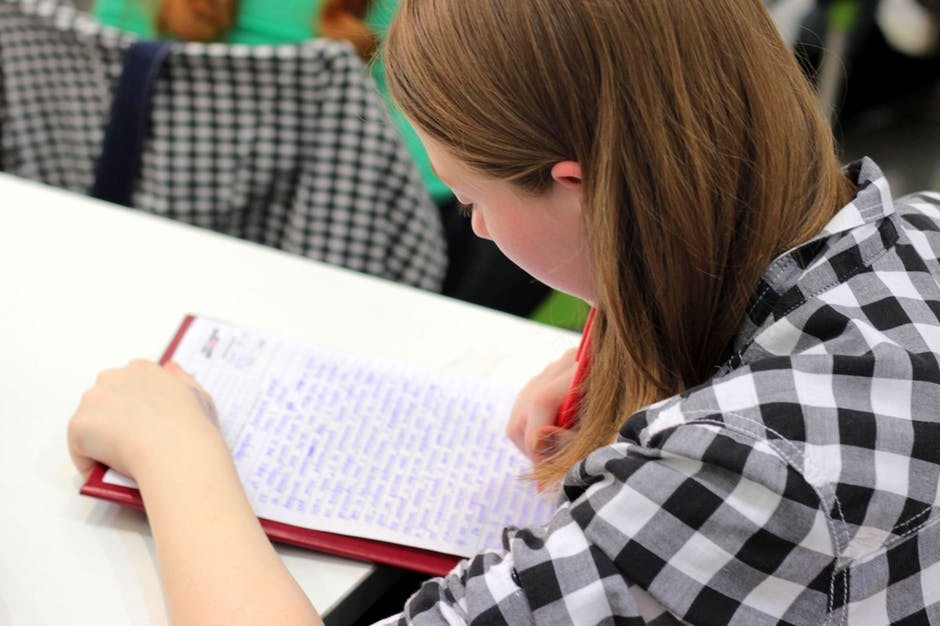 I found that many students don’t have a clear understanding of what it means to put effort into a learning activity.  To help with this, some teachers build in a requirement for students to place an effort score on any major piece of work prior to handing it in. A student handing in a lab report might propose that on a scale of one to 10 her effort on this was a six or seven. On an English piece she wrote or set of math problems solved her effort scores a nine or a four.

In addition to placing the score, what’s critical is that students write two to three sentences explaining why they gave the piece of work the effort score that they assigned.  In order for them to do that, a teacher has to build some common criteria that students can use in making their explanation. I found these four categories help:

Students can look through those four lenses to judge the level of their effort. First, time. It’s pretty difficult to put effort into a task without expending a chunk of time on the task. The second item is perseverance or do-overs. The number of repetitions is an indicator of effort. The number of times I was willing to run into the wall to discover that the process I was using wasn’t being effective and instead of quitting I backed up and started over is an indication of my effort. Third is patience; effort requires patience because my initial investment of effort frequently does not have a payoff. It’s difficult to get the perseverance that’s necessary unless I have patience, “stick-to-it-ness.” Lastly, when initially meeting success, does the student continue to put in effort or practice? More repetitions after the initial success is another indicator of effort. 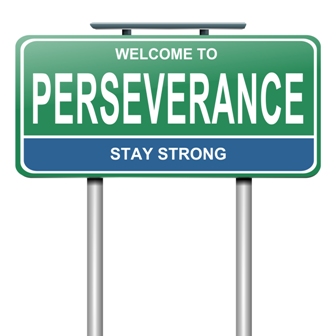 Imagine that students have just completed a task of working on 20 math problems over a day or two. A student might hand in 20 problems with all the problems done correctly and place at the top an effort score of four. The reason it was an effort score of four is that the student already knew how to do the problems. The effort that was critical or necessary was putting in enough time to do the problems.  Another student hands in the 20 problems with only a few done correctly and the student has, at the top, an effort score of 10. The reason it’s a 10 the student reports is that, “I was up till 11:30 last night working on this, I was online with people from two foreign countries, I completed a Khan Academy video and my mother said, ‘if you ask me one more question, I’ll hit you.'” The student put in a ton of effort.

I believe the conversations that teachers have with students connecting effort to outcomes is critical.

The student whose work was all done correctly with an effort score of four really ought to hear an apology. The teacher apologizing because in effect the student was given an inappropriate assignment. We would want a student to know if she can do the task with minimal effort, it’s not a good use of her time. Should she find assignments like that in the future, please point it out because the teacher would like to make modifications and adjustments so that the effort that you are investing is more likely to have a payoff for you.

The student who invested the effort of a 10 and wasn’t successful with the task, should be hearing a note of congratulations from the teacher for making that effort investment and should be hearing an apology. The teacher might state, “If you worked that hard and you didn’t make progress, it wasn’t an appropriate assignment for me to give you. We need to find a way to communicate with each other faster. Don’t go that long without being successful, without checking in with me so I can support your effort.”

I recall my daughter working on a project when she was in high school, where she worked pretty hard on the project and received a low grade. Her initial response to that low grade was that she wasn’t going to put much work or effort into that class in the future. I’m not at all suggesting that the grade she received wasn’t an appropriate grade for what she had produced. But I think if the teacher had known– If my daughter had communicated to the teacher the degree of effort she invested, it would have caused the teacher to start up a conversation: ”If you worked that hard on this project with this result, then there’s something wrong. You’re using the wrong tools, the wrong resources, there’s a missing link somewhere.” The teacher and the student communication can lead to a plan that creates greater student success.

Effort invested in teaching and coaching student effort can have lasting payoff.