Rule #12- We Are Powerful, Natural Explorers

In an earlier blog I mentioned that I was reading John Medina’s book, Brain Rules. I just finished and the last chapter on exploration was reinforcing and enlightening. What follows are some quotes from Medina and some of my personal connections.

With a granddaughter approaching five and a grandson approaching one I found many familiar experiences as I read. “Hypothesis testing is the way all babies gather information. They use a series of increasingly self-correcting ideas to figure out how the world works. They actively test their environment, much as a scientist would: Make a sensory observation, form a hypothesis about what is going on, design an experiment capable of testing the hypothesis, and then draw conclusions from the findings.”

Both my grandkids, at a very early age, loved to play “if I pull PopPop’s glasses off his nose, will he put them back and let me do it again?”.

Medina describes a 15 minute walk he did with his two year old son that went all of 20 feet as the “evolutionary need to explore” was allowed to control the pace. 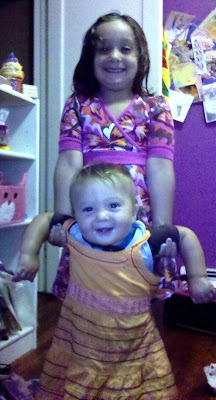 Most developmental psychologists believe that a child’s need to know is a drive as pure as a diamond and as distracting as chocolate… if children are allowed to remain curious, they will continue to deploy their natural tendencies to discover and explore…

But… children learn that education means an A. They begin to understand that they can acquire knowledge not because it is interesting, but because it can get them something.  Fascination can become secondary to, “What do I need to know to get the grade?”

But, good news… curiosity is so powerful that some people overcome society’s message to go to sleep intellectually, and they flourish anyway.

Having had my 62nd birthday this summer, I was delighted to read Medina’s reflections on two Nobel prize winning scientist in their mid- seventies:

They were creative like artist, wise as Solomon, lively as children. They had lost nothing. Their intellectual engines were still revving, and curiosity remained the fuel… we can remain lifelong learners. Researchers have shown that some regions of the adult brain are as malleable as a baby’s brain… creating new neurons within the regions normally involved in learning.

I often suggest to those new to coaching roles that their greatest asset can be a natural curiosity and desire to explore the teaching and learning process.

In an article about Larry King, who interviewed thousands on TV, he was quoted as saying his success was his curiosity.  “Curiosity didn’t kill this cat, it made him wealthy.”

For me, five minutes into a pre-conference with a teacher, the discussion about how what the students will be doing and what the teacher will be doing to generate learning has peaked my curiosity. That curiosity raises the questions I ask the teacher, often igniting her reflection which further fuels my desire to explore.

A five minute observation in a classroom for me can be much like Medina’s 20 feet journey with his two year old son. There is so much to explore!