In part 1 of this blog (here), I explored how the psychological theories or frameworks of person-centered, solution focused, and self-efficacy connect with my study and practice of coaching. Coaching Cultures in Schools download by Chris Monroe, Margaret Barr, and Christian van Nieuwerburgh, introduced to the work of Mark Adams, who had identified these psychological theories and frameworks that have an application to coaching.

Monroe, Barr, and van Nieuwerburgh state that these five frameworks are relevant not only to coaching itself, but also to the process of creating a coaching culture.

Self-determination theory is based on the work of Ryan and Deci (2000) stating that in order to function and grow optimally, all of us have an innate psychological need to perceive that we have competence, autonomy, and relatedness with others. Coaching can help us to be more competent, to feel more autonomous, and to sense more relatedness, thus improving motivation and increasing empowerment. This applies equally to school leaders and classroom teachers.

Years back, Daniel Pink’s TED Talk on motivation had me focus on the powerful impact of intrinsic motivation generated by autonomy, mastery, and purpose for students and educators.

Pink stated,” We need a whole new approach. The good news about all this is that the scientists who’ve been studying motivation have given us this new approach. It’s an approach built much more around intrinsic motivation, around the desire to do things because they matter, because we like it because they’re interesting and because they’re part of something important. And to my mind, that new operating system for our businesses revolves around three elements: autonomy, mastery, and purpose. Autonomy, the urge to direct our own lives. Mastery, the desire to get better and better at something that matters. And purpose, the yearning to do what we do in the service of something larger than ourselves.

As a coach, I find that getting the teacher to describe goals, goals that are important to the teacher, allows me to direct my attention to the teacher’s autonomy, mastery, and purpose. Too often I find PLCs or teachers’ professional growth plans built on goals that lack a connection to teachers’ values and passion. I have addressed this topic in an earlier blog, Identifying and Respecting Teachers’ Goals and Values.

Positive psychology founded by Seligman & Csikszentmihalyi (2000) is the study of optimal human functioning that aims to discover and promote those factors that allow us to thrive. A coach can support the coachee to identify and use their strengths and positive emotions. This allows the coachee to take action that builds the well-being of themselves and others, enabling them to flourish. At the heart of the positive psychology-based approach is the creation of a school community where the mental health and well-being of everyone is a priority.

“Too many coaching conversations are unfocused, with progress often depending upon the coaching client’s ability to bring an issue to the table for discussion. That is a sign of a lazy coach. A more effective practice is to have every conversation focus on the professional and personal goals that were established at the beginning of the coaching relationship, with a thoughtful focus on celebrating progress made since the previous conversation, identifying and addressing barriers to achievement of goals, and where appropriate, making modifications to those goals.“

(Doug Reeves: Getting the Most Out of Coaching)

My coaching approach is big on the “power of optimism.” A book titled, The Power of Optimism by Alan Loy McGinnis triggered a new understanding for me. I had always approached optimism as a trait. In other words, people were optimistic, or they weren’t. McGinnis instead identified 12 behaviors that we can consciously practice to increase our optimism. His work was reinforced for me by the book, Learned Optimism by Martin Seligman. It made sense to me – if there was such a thing as learned helplessness, that a person could develop a set of helpless behaviors, then it seemed that I could learn to be optimistic… learned optimism. Among McGinnis’ list of 12 behaviors are three that I felt really fit strongly into coaching. He stated optimist… 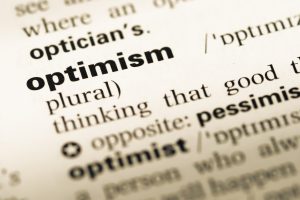 Optimists are never surprised by trouble was probably the most surprising item that I found on McGinnis’ list. I had imagined that optimists walked around with their heads in the clouds and didn’t see or ignored the problems below. But instead, I found that optimists are actually highly skilled at using a strategy called “worst case scenario.” They explore what the worst thing is that could happen if they moved ahead with a plan. Then because they have a plan either for tackling that worst thing or for changing their plan because they know what the worst-case scenario is, they approach risk taking with greater confidence. If I know I have a plan for what I’ll do, if the worst thing happens, then I can put all my energy into causing the desired outcome that I want. Pessimists never think through what the worst-case scenario is and therefore they’re always worried and concerned about what the worst thing is that might happen. That worry disrupts them from putting their energy into reaching the positive outcome that they desire.

When I’m coaching and the teacher is considering trying out an action, “What’s the worst thing that could happen?” is one of my go-to questions. The fact that optimist value partial solutions and they sense a control of the future are why I often focus on the continuum of progress that I mentioned in part one under the solution-focused approach.

Consider where these principles or frameworks fit into your coaching. Person-centered, solution-focused, self-efficacy, self-determination, positive psychology. I think it’s a great way for building reflection into your coaching practices.

Let me know your thoughts. You can always reach me with a comment below or at barkleypd.com.