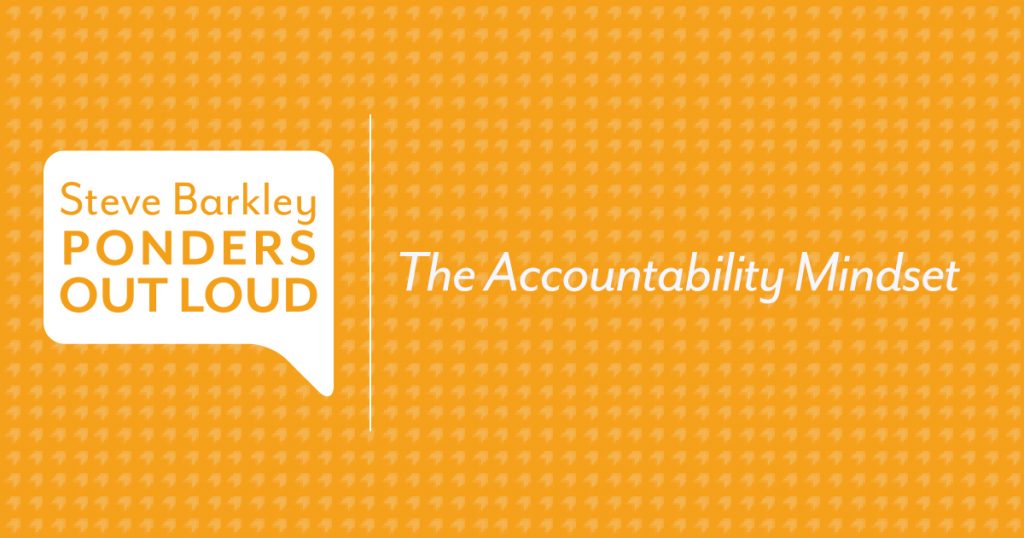 The greatest growth from coaching is likely to occur when the goals from coaching have been set by the coachee. Ownership of the goal increases the commitment to the actions necessary for the goal to be reached. Five strategies are presented for a coach’s conscious practice. Similar to being on a seesaw, coaches need situational modifications to keep a balance for progress.

Steve: 00:28 The accountability mindset. I read an interesting article titled, Cultivate coachability With These Five Mindsets,” written by Julie Winkle Giulioni. In the article, she describes five mindsets that help others realize their potential, perform optimally and engage in continuous learning. I pulled one of the five mindsets as a focus for this podcast and it’s the mindset that she calls accountability, the accountability mindset, helping others to own their own plan. Giuliani writes, “one of the greatest gifts a coach can give others is a sense of ownership, but this requires a mindset that places responsibility squarely on the other person.” She lists five strategies or practices that tap into greater accountability in others. As I go through them one at a time consider how they apply to your roles in coaching teachers. Number one, involve others in setting their own goals and action plans for reaching them.

Steve: 01:57 Those of you using goal setting with your students know that it’s critical that the student take an active role in setting goals. And equally, it’s critical that the student can identify what actions, what behaviors, what strategies they would put into practicein order to bring about their goal. A student making a commitment to raise their grade in a class might decide that it’s necessary to put in a minimum of three study hours during the week. Three study hours that include no social media being present. A commitment to the action plan becomes critical because it’s unlikely that the first steps implementing the plan would show up as progress towards the goal. When coaching teachers, our work as a coach should be driven by goals that are set by the teacher, generally goals that are connected to some increase in student learning or student success. For those goals to be achieved, a teacher needs to make a commitment to an action plan.

Steve: 03:27 A teacher may decide to change her practice so that she’s going to implement more probing and encouraging students who ask question rather than providing clues or scaffolding. Her desire is to increase student perseverance and problem solving. Again, commitment to the action plan is critical because the teachers first changes in her behavior are unlikely to produce the desired student outcome. A matter of fact, in this case, the teacher looking at doing less clueing and scaffolding, doing more probing and encouraging is likely to meet students who respond with stronger pleas for help. The teacher needs the commitment to the action plan to stay the course. Giuliani’s second strategy is encourage others to develop their own monitoring systems to track progress. I suggest that most of these monitoring systems actually need to two components. One where the person is tracking their follow through on the action plan.

Steve: 04:49 And then later they’re tracking progress in reaching their outcome. So for example, that student who was looking to increase their grade in a class by increasing their uninterrupted study time, might first be tracking on the calendar that they can show those three times in the past three weeks where they had that uninterrupted study hour with mom holding their cell phone during that time. They’re then ready to be looking and collecting indicators of a increase in their learning. Is that showing up in in quizzes? Is it showing up in my ability to answer questions during class? Do I find myself follow along better with new learning because of the time I’m spending studying? All of this is suggesting that improvement in a class grade coming later. Similarly, the teacher who’s looking to increase student perseverance and problem solving through her use of more probing and encouraging, would need to first collect data that indicates that she has successfully implemented her plan.

Steve: 06:19 This is a great spot for peer coaching, where the teacher invites a colleague to simply record questions that students pose to teachers, perhaps while they’re working on projects in groups and what the teacher’s response is to the questions that students posed. This will provide the teacher with support that she is implementing the change in her practice, or will indicate for her that she needs a more conscious approach and continued practice at bringing about her change in behavior. Later, the peer coach can now switch their focus on students and begin tracking what student learning production behaviors are apparent after the teacher has probed and encouraged as a response to student questions. Finally, is student perseverance increasing? Are they working on a problem longer and taking more attempts? The third suggestion from the article is resist solving problems. Instead encourage others to search for their own solutions.

Steve: 07:39 Often, when coaches discuss the struggle that they have in “holding back” rather than too quickly offering solutions, I connect it to the struggle that often exist in parenting. When does a parent solve a problem for a youngster versus when do you coach and support them in working through it themselves? It’s a situational call. I’ve heard this compared for coaches as to being on a seesaw. Too much or too little involvement in the problem solving tilts and throws off the balance of the coaching relationship. A general guideline for me when coaching is that I seek for the client to own an experiment before I take a role in coaching its implementation. If I offer an idea and the teacher jumps quickly to wanting to implement the idea, I pause and question about what might be wrong with the idea or why it may not work.

Steve: 08:55 At the time of implementation of an experiment with a new strategy, I’m looking for the teacher to own the idea rather than simply the teacher experimenting with my idea. A coach wants to empower the coachee to make decisions, make errors and solve problems. That’s what leads to learning and growing. Giuliani’s fourth guideline, let others determine how and when to follow up. The coach who too closely directs the follow up activities on a plan, can actually move the coaching experience to one that becomes more supervisory. The process becomes owned by the coach rather than owned by the coachee. Asking about a follow up plan can assist the coachee in following through on their commitment to make progress. I often describe the ending of a post coaching conference I’m having with a teacher as a pre-conference. In other words, my post-conference turns into a pre-conference when it sets up what teacher may desire as a follow up from the coaching session that we’re currently in.

Steve: 10:24 Sometimes the teacher has a desire for more information to be gathered to assist in developing a plan for action. Things emerged as we discuss the information collect in our first observation. At other times, the teacher is requesting coaching on her conscious practice of a strategy that’s being implemented or observing the students to assess the impact of the strategy that it’s having on student learning production behaviors. Again, the balancing act for the coach is supporting and not controlling. And Giuliani’s last guideline, honestly help people confront performance shortfalls and own plans to correct them. It’s important to support people you’re coaching by communicating the difficulties of changing our teaching practices. As a coach, communicate your understanding of the discomfort that comes from consciously implementing a new practice, one which often causes us to feel clumsy. Show your recognition of experiencing the learning dip, where our initial implementation can actually cause a decrease in our current effectiveness. When that new practice initially has less effective results, is when we’re all tempted to consider turning back to our old previous and more effective practice, thus limiting our growth and achievement of new goals. I find the following quote from Bruce Joyce and Beverly showers that appeared in one of the earliest articles on the coaching of teachers does a great job of presenting this issue of shortfalls in our performance.

Steve: 12:29 “Changing what we do even slightly can balance the rest of our game. Whether switching from quarterback to tight end, adjusting the grip on a golf club or initiating an inquiry procedure for science teaching, the new skill does not fit smoothly with existing practice. The fact that the new skill may have been practiced in parts and practiced thoroughly in simulated conditions does not prevent the transfer problem. Other behaviors must adjust the presence of a different approach. And the discomfort of this new awkwardness is often enough to ensure a return to the former smooth, if less efficient performance. Perhaps the most striking difference in training athletes and teachers is their initial assumptions. Athletes do not believe that mastery will be achieved quickly or easily. They understand that enormous effort results in small increments of change. We on the other hand have often behaved as though teaching skills were so easily acquired that a simple presentation, one day workshop or single videotape demonstration, were sufficient to ensure success classroom performance. To the extent that we have communicated this message to teachers, we have probably misled them.”

Steve: 14:07 So let’s recap. As I read through the five elements from Giuliani, consider how they apply to your work in coaching. Involve others in setting their own goals and action plans to reach them. Encourage others to develop their own monitoring systems to track progress. Resist solving problems, instead encouraging others to search for their own solutions. Let others determine how and what to follow up. Honestly help people confront performance shortfalls, and own plans to correct them. You’ll find the link to Giuliani’s article in the lead-in to this podcast, as well as the link to the Joyce showers piece. I wish you well in your coaching. Thanks for listening.

Steve [Outro]: 15:02 Thank you for listening. You can subscribe to Steve Barkley Ponders Out Loud on iTunes and Podbean. And please remember to rate and review us on iTunes. I also want to hear what you’re pondering. You can find me on Twitter @stevebarkley, or send me your questions and find my videos and blogs at barkleypd.com.