Podcast: ”I Don’t Know What I’d Ask a Coach to Focus On?” - Steve Barkley

Podcast: ”I Don’t Know What I’d Ask a Coach to Focus On?” 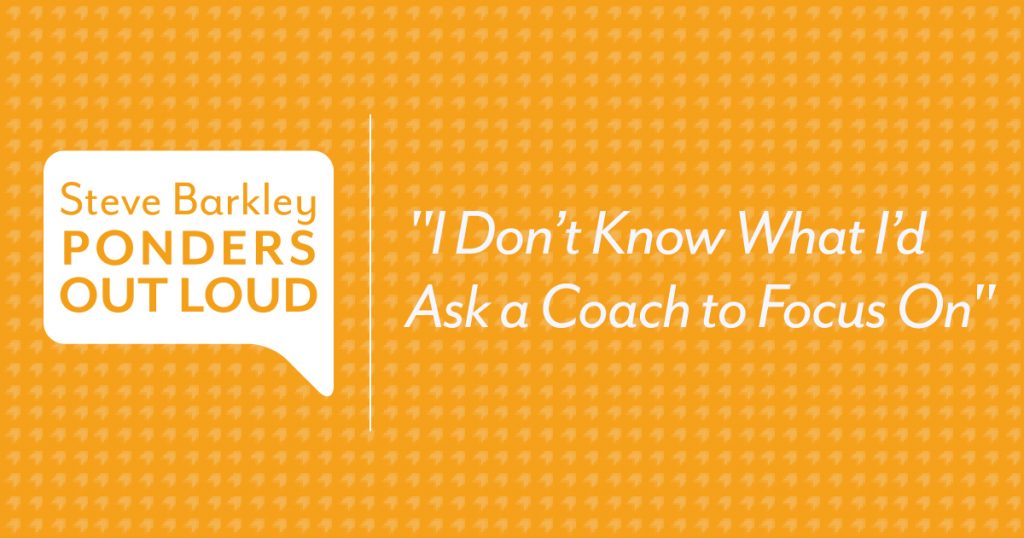 How does a coach respond when teachers suggest they don’t have an idea how a coaching observation could support them? Why does everyone deserve a coach’s support for reflection? Reflection on surprises, failures, and frustrations are opportunities for insights and growth. Sample coaching questions are shared.

View Atul Gawande’s video, “Want to Get Great at Something? Get a Coach” here.
Read the article,”Don’t Underestimate the Power of Self Reflection” here.

Steve: 01:40 I viewed a TED talk video by Atul Gawande titled, “Want to Get Great at Something,? Get a Coach.” He raised this question, “how do professionals get better at what they do?” And this question, “how do they get great?” He suggested there were two historical answers to that question. In professions like medicine, law, and music, he said that you study, learn, practice, get certified, and then you manage your own improvement. The second example he pointed to was in sports and the tendency in sports is for everyone to have a coach. The world’s best have a coach. Usually, coaches. Listen as Gawande shares what he found in an interview with violinist Itzhak Perlman.

Atul Gawande: 02:47 So we ended up having an almost two hour conversation about how he got to where he got in his career. And I asked him, I said, “why don’t violinists have coaches?” And he said, “I don’t know, but I always had a coach. You always had a coach. Oh yeah, my wife Tobi, they had graduated together from Juilliard and she had given up her job as a concert violinist to be his coach sitting in audience, observing him and giving him feedback. Itzhak, in that middle section, you know, you sounded a little bit mechanical. What can you do differently next time?” It was crucial to everything he became he said. Turns out there are numerous problems in making it on your own. You don’t recognize the issues that are standing in your way, or if you do, you don’t necessarily know how to fix them. And the result is that somewhere along the way, you stop improving. And I thought about that and I realized that was exactly what had happened to me as a surgeon.

Steve: 03:59 “Getting better” is a phrase that I’ve always felt received too little focus in our descriptions of educators’ professional growth. Way too much time, historically, has been spent with school leaders’ focus on evaluating teachers, usually upon a list of what I might call minimum competencies. Teachers at times got focused on earning credits or hours to illustrate growth qnd then through the evaluation process, they frequently got invested in defending their proficiencies rather than pondering where new skills or learning could drive their success and therefore their student success. I’ve used the illustration that if I take everything I know about teaching and learning and I put it inside of a balloon, the outside of the balloon represents my areas for future study, for future development. So the more I learn, the more I can develop. Every time a new piece of learning is pushed into my balloon, it increases the areas for further study and exploration. Gawande shared his experiences with coaching and getting better. Hear what he has to say.

Atul Gawande: 05:28 I’d entered practice in 2003. And for the first several years, it was just this steady, upward improvement in my learning curve. I watched my complication rates drop from one year to the next and after about five years, they leveled out. And a few more years of that, I realized I wasn’t getting any better anymore. And I thought, is this as good as I’m gonna get? So I thought a little more. And I said, okay, I’ll try a coach. So I asked a former professor of mine who had retired. His name is Bob Ostein and he agreed to come to my operating room and observe me. I remember that first case, it went beautifully. I didn’t think there would be anything much he’d have to say when we were done. Instead, he had a whole page of notes.

Atul Gawande: 07:08 And I had to think, you know, there was something fundamentally profound about this. He was describing what great coaches do and what they do is they are your external eyes and ears providing a more accurate picture of your reality. They’re recognizing the fundamentals, they’re breaking your actions down and then helping you build them back up again. After two months of coaching, I felt myself getting better again. And after a year I saw my complications drop down even further. It was painful. I didn’t like being observed

Steve: 07:59 Over the years, I’ve become increasingly convinced that reflection is the key to continuous growth. I believe that having a coach increases both the quantity and quality of the reflection I engage in. My thinking was reinforced in a Harvard business review article titled, “Don’t Underestimate the Power of Self-Reflection.” The authors stated, “research shows the habit of reflection can separate extraordinary professionals from mediocre ones. We would go so far as to argue that it is the foundation that all other soft skills grow from.” I’ve always suggested to teachers that if you spent 10 minutes with a coach in a pre-conference before any upcoming lesson, and it could be 10 minutes right before the lesson, within that amount of conversational time, you are likely to identify something that the coach can pay extra attention to from an observation mode that will then increase your opportunities for self-reflection.

Steve: 09:23 Now, the truth is, even if the coach doesn’t observe the conversation, the pre-conference conversation increases a teacher’s consciousness during the lesson and therefore reflection that actually is occurring during the lesson as well as after the lesson. Here are some of the questions that I use in pre-conferencing to set the stage for teacher reflection. What are the most important things you need to get students to do during this learning activity? That’s what I call the learning production behaviors. How do things you know about your students influence your plan? What are key teacher actions you are planning to use?

Steve: 10:16 What are some decisions you foresee making during the learning activity itself? If I was observing like a video camera, what would you want me to zoom in on to capture information for you to explore further? The Harvard business review article suggested three areas or themes that might be appropriate for reflection. The three they suggested were surprise, failure or frustration. Surprise occurs when we act on a prediction or hypothesis that’s based on something that’s happened in the past, and then what we expected to happen didn’t happen, or what happened wasn’t expected. Failure describes a time when we perhaps made a mistake or messed up. It’s an opportunity where we can learn something from a negative example. And frustration occurs when our goals are thwarted when we’re unable to make progress toward a desired outcome. Pretty easy to see how all three of those things are happening throughout a teacher’s day, as well as throughout an administrator’s day, which is why we need to be building opportunities for school leaders to receive coaching. Surprise, failure, or frustration may emerge when the post-conference reflects on the pre-conference, as well as the observation information that was collected.

Steve: 13:17 I like to get the teacher’s response to that question before I share any thoughts about the information that I collected. What did you learn during the activity and what are you thinking now about what’s next? Reflecting on frustration can be helpful when looking at goals for a professional growth plan or for a professional learning communities growth plan. The authors of the article on reflection stated that in their study of leaders, when leaders felt frustration, those opportunities became time for growth growth that grew out of reflection. There were opportunities for improvement, change innovation, and often even led to the development of other skills like communication, problem solving, or patience. Here’s some questions I’ve explored with folks to look at how frustration might point to an area for coaching and growth. Where are you frustrated with the current results in student learning?

Steve: 14:34 Here’s one I’ve enjoyed using as it usually gets the teacher to take a step back and kinda look at me and then really open up. The question is, are there students for whom you are working too hard? During that pause with the look from the teacher, I point out that what I mean is that the effort that is going into the teacher’s work, isn’t producing the learner outcome from the student. So in effect, the teacher’s working too hard for the result they’re getting. I’ve had many teachers open up from that reflection. Here’s another one that’s gotten some interesting feedback from teachers. Do you wish you and your students could invest learning time in additional or different outcomes that you believe are important? That helps me get more understanding behind the teacher’s thinking and leads off to possible ways that a teacher could work to make those things happen. I hope you’ve gained some thoughts, some reflections, on how to respond to the teachers who don’t know how they could possibly use a coach. Consider reflection on surprises, failures, and frustrations, both for yourself and for those you’re coaching. You’ll find the links to the Harvard article and to the Ted talk video in the lead-in to this podcast. Always looking to hear your thoughts or questions that emerge from listening appreciate to continue the conversation and have you spark my reflection. Thanks for listening.

Steve [Outro]: 16:35 Thank you for listening. You can subscribe to Steve Barkley Ponders Out Loud on iTunes and Podbean. And please remember to rate and review us on iTunes. I also want to hear what you’re pondering. You can find me on Twitter @stevebarkley, or send me your questions and find my videos and blogs at barkleypd.com.