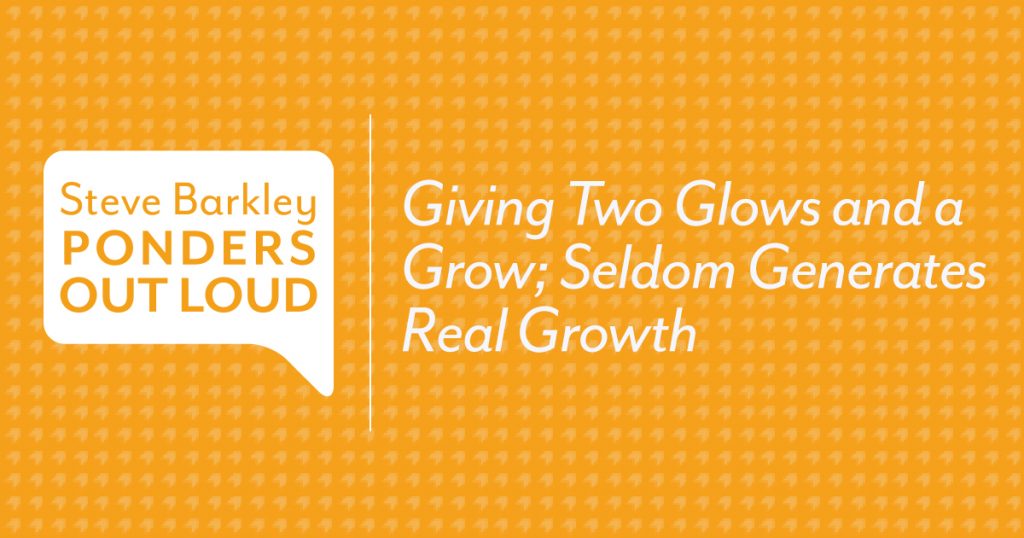 The practice of giving glows and grows, like the feedback sandwich, seldom generates growth and change. Frequently, some similar structure is used to give feedback to teachers following walkthroughs. Self-reflection is the key to our decision to commit to a change behavior. Without conversations, these notes rarely generate true reflection. When we generate our own “glows” and “grows,” we are on a growth trajectory.

“Why Bosses Rarely Give Negative Feedback, Backed By Science”

“Glows and Grows: A Positive Framing for Self-Reflection”

Steve: 00:28 Giving two glows and a grow seldom generates real growth. I began to ponder this practice a little deeper following a conversation I was having with middle level leaders who felt that the feedback they were receiving from administrators following walkthroughs was not productive. We had been exploring the similarities and differences in receiving compliments, praise and approval. Here are the definitions that we worked with. While all three of them are similar in that they are positive, they differ because a compliment tends to be positive feedback for a possession or a trait, such as that’s a lovely blouse. Praise tends to be positive feedback for something you did that the person delivering the praise values: “I like how you waited patiently.” And approval is when we receive positive feedback for something that we value, such as, “your students were engaged in struggling and persevering as they sought solutions.” Approval feedback requires you to know the person you’re responding to.

Steve: 01:53 You see, I can give a compliment to a total stranger without any information. Stepping on the plane, the flight attendant says, “I love that tie.” It’s a compliment. She doesn’t need to know if it’s costly, if I picked it out myself, or if it was a special gift. To give praise, you need to know that the person did something that you’re praising, such as, “thanks for being on time.” In order to give approval, I need to recognize something that the person did or accomplished that that person values: “I overheard your students in the hallway still debating the court case you explored in class today.” As a smile comes on the teacher’s face after that statement, it’s pretty much an indicator that my statement was approval. A teacher might receive a completely positive administrative evaluation and not sense any approval as the items on the district’s evaluation are not reflective of the teacher’s most important values.

Steve: 03:07 At the same time, a few words from a principal as she leaves the teacher’s classroom after looking at some students work can be approval that generates a glow from the teacher, because those words zeroed in on the teacher’s source of pride. Coaching should be an opportunity to increase the approval that teachers receive. When I’m pre-conferencing with a teacher, I’m listening for those sources of value and pride. Then I look for occurrences during my observation that I can mention in a post-conference. Knowing and recognizing each other’s sources of approval strengthens our ability to work as a team. It was during this conversation about praise, compliments and approval that one of the teachers talked about the notes that they received from administrators, following walkthroughs. The notes followed this format: I saw – and a factual statement was made, a positive and something was identified that the administrator was giving praise or approval for. And then, an, “I wonder…,” a question that was frequently interpreted by teachers as an element of negative feedback. Whatever it was that the administrator wondered about, the teacher read the statement as this is an area that isn’t strong enough.

Steve: 04:51 Without the teacher engaging in a conversation with the observer, it’s unlikely that valuable reflection would be generated from this form of feedback and reflection is key to the teacher growth. I interpret this kind of feedback as an attempt to be safe and compliant. A kind of feedback sandwich. A little bit of digging led me to some interesting articles. One by Jeff Hayden in Ink magazine was titled, “Why Emotionally Intelligent Leaders Avoid the Feedback Sandwich.” He wrote, “most of us were taught to deliver constructive feedback by using the feedback sandwich. Start with a positive, share the negative close with the positive. Unfortunately, the feedback sandwich is always tough to swallow.” Hayden describes the feedback sandwich design with this kind of thinking: I need to give you negative feedback, but first I’ll say something nice so you won’t think I hate you, then I’ll say something nice so you won’t be mad at me when you leave.

Steve: 06:12 The problem he states with the feedback sandwich is that the people receiving it feel manipulated. And even if at first they don’t, he says give it time, because our positive qualities tend to stay consistent. So the same bread eventually starts to taste stale. And for the likelihood of positive change occurring, research suggests that the feedback sandwich almost always fails to correct negative or subpar behaviors. I found some additional reinforcing information in another Ink magazine article titled, “Why Great Bosses Rarely Give Negative Feedback – Backed by Science.” The article shared that research shows that people tend to clearly remember the positive feedback they receive, but that within a short period of time, they don’t remember negative feedback at all. The problem lies in how we form beliefs about ourselves. We all tend to overestimate our abilities. We want to believe that we’re smart, we want to believe that we’re talented and we want to believe we’re good at what we do.

Steve: 07:44 In other words, subconsciously, we want to find ways to feel good about ourselves. So we’re really good at quickly, rationalizing a way and even forgetting negative feedback. So our beliefs about ourself after receiving positive feedback remain adjusted upwards. In other words, we feel even better and believe stronger. But beliefs after negative feedback substantially recover and reflect the feedback to a much smaller extent. That’s the effect of negative feedback on our beliefs is mitigated over time. And without a change in those beliefs, there isn’t a need for change in our practice or behavior. In other words, people try to and actually manage to, suppress feedback that threatens their desired view of themselves. Psychologists call this motivated belief, say something good about me and I’ll remember because positive feedback reinforces self image. Say something negative about me though, and without even trying, I’ll suppress it and eventually forget it.

Steve: 09:13 Those articles reinforced my focus on conversation with teachers as being essential for any observational data or observer insights to truly have a positive impact on teacher growth, especially teacher growth that leads to student growth. The purpose of that conversation is to generate the teacher’s reflection. And that was tied together in an article by Tavia Clark titled, “Glows and Grows: A Positive Framing for Self-reflection.” Ah, there it is – the key – self reflection. She describes glows and grows as decisions and labels that the person is deciding themselves, not being handed by another person. She describes glows as the positive things, things that we’re proud of, the interactions that felt positive or what we want to keep doing more of to move forward. She states that grows are not quite the opposite of glows. It’s anything that can serve to elevate our work. When Clark was working as a teacher trainer and coach, she frequently asked questions of her participants following up
her work in order to gather feedback that she could turn into glows and grows.

Steve: 11:10 Here’s examples of questions that she gave to her participants: What did you learn today that you will use to inform your instruction and help you design better learning experiences for your students? Have you shared what you learned with your colleagues or your students, or even people outside the building, such as colleagues outside of your school, in your district or your broader personal learning network? How have you found ways to elaborate and expand on what you learned in new and different ways? In what ways has learning impacted or changed your practice? If it hasn’t, you’re welcome to say why. Studying those responses would allow her to build her grows and glows. Here’s the process that Clark states she uses to drive her own reflection with glows and grows. Every Friday, she collects data on work that she had done during that week and under each of the projects, she identifies three pieces of information. First, facts of what the worker action she engaged in was, just listing simple statements. Second, she reflects on “glows” or the things that she’d like to keep doing more of in the future. And then lastly, she considers “grows” or opportunities to elevate or improve on the work. Then she adds a piece that just strikes me as really powerful. At the end of each month, she looks back over that month’s glows and grows framed with this question: “how is my work impacting the future, building something meaningful and amplifying others?” That’s a powerful reflection.

Steve: 13:29 Consider how you can collect data, information, input and insights from others that you can use to form your own glows and grows. How can your coaching work encourage teachers to request your observation and data collection so that they decide upon glows and grows, rather than asking you to make those identifications. Generating the self-reflection of the people you’re coaching is a powerful asset to provide. Thanks for listening.

Steve: 14:20 Thank you for listening. You can subscribe to Steve Barkley Ponders Out Loud on iTunes and Podbean. And please remember to rate and review us on iTunes. I also want to hear what you’re pondering. You can find me on Twitter @stevebarkley, or send me your questions and find my videos and blogs at barkleypd.com.