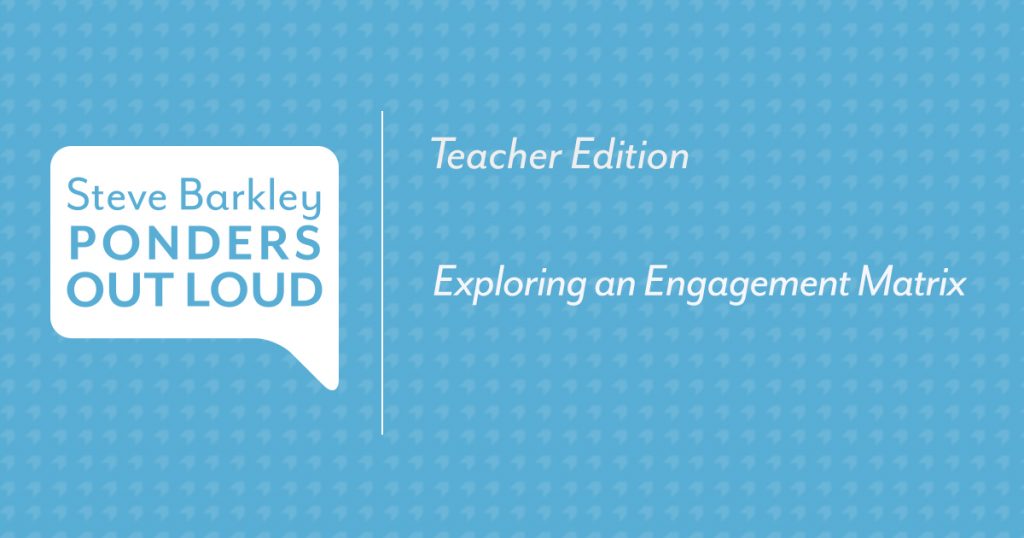 Steve explores moving students from being non-compliant to compliant and from compliant to interested with educator and author Heather Lyon. They explore the role of relationships, consequences, and students’ interests in learning tasks. The value of students reaching a level of absorbed is also addressed.

PODCAST TRANSCRIPTSteve [Intro]: 00:00 Hello, and welcome to the teacher edition of the Steve Barkley Ponders Out loud podcast. The complexity of teaching is both challenging and rewarding. And my curiosity is peaked whenever I explore with teachers the multiple pathways for facilitating student engagement in the exciting world of learning. This podcast looks to serve teachers as they motivate coach and support their learners.

Steve: 00:31 Exploring an engagement matrix. This podcast will examine how we engage students who are non-compliant to reach a level of being compliant. Also, it looks at how we expand and move compliant students to an area of being interested. And then at times, have students discover the enjoyment of being absorbed. I’m excited to have Heather Lyon joining me today for a conversation about engagement. Heather is the author of, “Engagement is Not a Unicorn, It’s a Narwhal,” and she’s also the author of a newly released book called, “Big Book of Engagement.” So welcome Heather.

Heather: 01:48 Yeah, so the title is, “Engagement is Not a Unicorn, It’s a Narhwall.” I don’t need to explain to anybody what a unicorn is. Two year olds know what a unicorn is, even though a unicorn is not a real animal, it’s mythical. So there’s nowhere on earth you can walk to and go find some unicorns, but narwhals are real animals, even though people may not know what I’m talking about, or they may know what a narwhal is, but they may not know it’s name or that it is real and swimming around in our oceans as we speak. So in narwhal is looks like a dolphin and a unicorn had a baby. And so I love that you have the picture here because that’s a narhwall. And it’s actually a tusk or that is growing out of their head.

Heather: 02:43 But the concept of the book is that we often think of the word engagement in mythical ways, that it is not real, but
something people talk about as though kids are going to go skipping around the halls at school singing kumbaya and saying, “I can’t wait to learn today” and at the end of the lesson, they’re going to start clapping for the teacher. “Yay, thank you so much!” That’s engagement as a unicorn. Engagement as the narwhal is the concept that yes, engagement exists in schools, but like a narhwall, it’s not really that common. Some people have never seen one before. They don’t really know what they’re talking about when they’re talking about it and so it’s hard to achieve in practice if you don’t understand it in concept. So that’s why the subtitle is, “Mind Changing Theory and Strategies That Will Create Real Engagement.”

Steve: 03:54 Well, I just love the way you laid out the concept of looking through the lens of engagement as noncompliant compliant, interested, and absorbed and the way that you were able to place it on a on a matrix, I thought provided great insight. So I’m wondering if you’d walk people through a little bit of your definition and then the layout of the matrix?

Heather: 04:23 Yes. Thank you. So there are four stages of engagement and two of those stages are really forms of disengagement. And so I created a continuum of engagement. So from left to right, it would be non-compliant compliant, interested and absorbed. And that continuum felt really good, but what I wanted to know as an educator is how to shift someone from non-compliance to compliance, how to go from compliant to interested, and then interested to absorbed. Or why is it that some people regress? Why do we slip from being interested to compliant or compliant to non-compliant? So upon some deep thinking and reflection, I realized that there are variables. So one variable is along the horizontal, on the bottom of what I call the engagement matrix, which is the relationship to the task. Do you want to do the tasks that you’re asked to do?

Heather: 05:34 If the answer is no, then you’re going to be compliant or not compliant. And if the answer is yes, then you’re going to be interested or absorbed. So that’s the first question. Do you like the task that you have to do? The second question relates to the vertical axis, which is what is your relationship to the external person or consequence, consequence being a neutral term. It’s not positive or negative, but can be positive or negative. So meaning, how do I feel about the person who’s asking me to do this work? And then how do I feel about the consequence positive or negative for doing the work? So if I’m non-compliant, I don’t like the task because I’m on the left side of the matrix, and I don’t like the person who is asking me to do it, or the reward or the the stick – the carrot on the stick that I get for doing it.

Heather: 06:34 So I’m not doing this for you, Steve and I don’t care how much you pay me or how you threaten me, I’m still not going to do it. That’s non-compliance. Compliance on the other hand starts with, I don’t want to do it, just like not compliant. I don’t want to do it, but it’s – Steve, I really like you and so I wouldn’t do this for anybody else, but you’ve asked me to do this. So I’ll do it for you Steve. It doesn’t mean I enjoy doing it, but I enjoy my relationship with you so I’m not going to harm that relationship. Or it might be, I wasn’t going to do it for free, but now you’re offering me 50 bucks, alright, I’ll do it now. So that would be that positive consequence or reward or carrot. Or, I wasn’t going to do this before, but now you’re saying that you’re going to call my mom or you’re going to fire me or fill in the blank with a the negative consequence, so I’ll do it now. Doesn’t mean I want to, but I’ll do it.

Heather: 07:36 To get from compliant to interested. really what we’re saying is, again, do you like to do it? Yes. I like what I’m doing, but I also need a consequence to continue doing what I’m doing. So in a classroom, that means kids can really enjoy the work. They’re doing it and they may even be leaning in, with group work or something, their butts in the air. When it comes time to present their work or talk about it, they’re like, “yeah, I’ll tell you about what I’m doing.” But when the bell rings, what do the kids do? If the bell rings and the kids get up and leave, they were just interested. And I say, just interested because there is another place to go.

Heather: 08:28 I don’t say just interested because interested is not high enough. I think interested is where we should be aiming for 100% of kids in 100% of classes, 100% of the time in schools. That’s the goal. Absorbed is beyond the goal. I’ll talk about that in just a moment. But the reality is that interested for adults tends to be where we are with our work. And I know this because we don’t have a bell that rings, but at the end of the day, when it’s time to go home, do you want to stay at work and continue working? On the weekends, if you work Monday through Friday, what do you want to do Saturday and Sunday? Most of us want to do some other things. It’s not that we don’t enjoy our work, it’s that we have other things that we don’t get paid to do, that we would like to do or things that we need to do and so we’re compliant with those things.

Heather: 09:32 So we’re either doing the things we’re really absorbed in, or we’re doing the things that we have to get done. And so interested means you’re getting a paycheck for it, likely. Absorbed is that higher bar and absorbed is not the place that I think that we should aim for 100% of kids and 100% of classes 100% of the day, because absorbed is reserved for what do we want to do when we don’t have to do it. Because our relationships to the task is so high that we don’t need an extrinsic person or consequence in order to do it. We are absorbed. Time passes by differently. So absorbed kids in school are kids who you have to tell them the bell rang, you have to go now. You have to tell them, please put that book away. Reading time is over.

Steve: 12:11 The pay actually detracts from the absorption.

Heather: 12:14 That’s exactly right now. Like, I love to write. And so, I don’t need to ever get paid to write, but in order to sell books and have other people read my books, that requires marketing, that requires talking about the book that requires lots of things that I didn’t have to think of before.

Steve: 12:39 I’ve always kept in my mind that I’d love kids to discover being absorbed at some point. That you shouldn’t get out of school without having discovered the value or the fun of being absorbed.

Heather: 12:58 Yes. Thanks for bringing that up because I should have explicitly said that it’s not that I don’t expect absorption in school, it’s just a higher bar. So it’s not going to happen in every classroom every day for every kid, but it is going to happen for every kid in school. That should be the expectation.

Steve: 13:18 I placed a link to Heather’s matrix and the lead-in to this podcast. Student engagement is certainly one of the complex components of teaching. It’s a continuous trial and error balancing act, considering our relationships with students, considering real and perceived consequences of student engagement and students’ personal interest and satisfactions. Here’s wishing you many absorbed moments while teaching. Thanks for listening.

Steve: 14:01 Thanks for listening in folks. I’d love to hear what you’re pondering. You can find me on Twitter @stevebarkley, or send me your questions and find my videos and blogs at barkleypd.com.