Podcast for Parents: Youngsters Knowing When and How to Effort - Steve Barkley

Podcast for Parents: Youngsters Knowing When and How to Effort 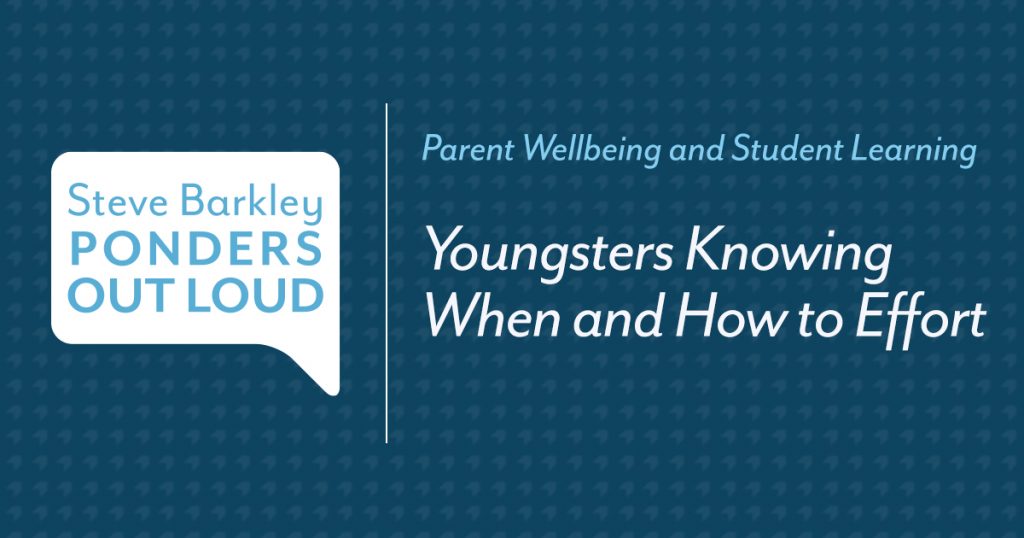 How do we decide the value or motivation of an investment of effort? How young do youngsters conduct a cost/benefits assessment of effort? What role can parents and caretakers play in having learners assess their effort. Steve explores the impact of time, repetition/practice, patience, and practicing after success.

Read the U of T article here.

PODCAST TRANSCRIPTSteve [Intro]: 00:00 Hello, and welcome to the parents as learning coaches edition of the Steve Barkley Ponders Out Loud podcast. Parents and caregivers play many different roles, at times, even somewhat conflicting roles as they support children’s development. The pandemic has shown a light on the importance of parents supporting learners. In this podcast, I’ll look to share my experiences as a teacher, educator, parent, grandparent, and continuous learner that can support your coaching efforts.

Steve: 00:34 Youngsters knowing when and how to effort. How often are young children and teenagers told to always put forth their best effort? How often have they heard a parent or a teacher say, “had you put in a little more effort, you would’ve gotten a higher grade.” Putting in effort usually is not an automatic action. Often, effortful behaviors are helpful in the long run, but they can feel awful unpleasant in the current moment. That’s certainly illustrated in my attempts at meeting my personal walking goal each day. It often takes quite a bit of self-talk to focus on the long-term, better health over the feeling tired now, or the thinking about what else I could be doing with this time. There is a cost/benefit calculation that we go through in order to motivate and initiate effort. The more I value a desired benefit or outcome, the more I’m willing to deal with any unpleasantness of the upfront effort.

Steve: 04:47 Both the group that saw the researcher easily move the box and the group that saw the researcher struggle and not be successful, did not put in the number of attempts that the children did who saw the researcher move the box after several attempts. This finding suggests that toddlers engage in a sophisticated decision making process, similar to the one that we as adults might use when we create a list of pros and cons and use it to influence our choice. The toddlers computed the utility or usefulness of trying to move the box by weighing the potential cost of what they had to lose. In other words, whether it was worth it to keep pulling the rope and what they had to gain in terms of the likelihood they could access the toy. As children mature, parents can engage in debriefing effort with students, as well as planning for future effort.

Steve: 06:06 When I’ve explored this with teachers, I suggest that they add an element of asking students when they hand in some tasks to actually put an effort score onto the assignment. In other words, if you think about a scale from one to 10, where one is a little effort and 10 is a lot of effort, ask students to to rate their effort and then, this is an important part, identify why they would give it that particular rating. So for an example, a student could hand in a math homework assignment with 10 problems, all solved correctly, and the student might assess that their effort was a three because they knew how to do the problems and the only effort necessary was taking the time to complete the assignment. While again, another student may hand in the same assignment with only two out of the 10 problems done correctly, and they might report that their effort was an 11 on a scale of one to 10, because they spent a lot of time asking their parents questions and even searched online for help, but they still couldn’t figure it out.

Steve: 07:22 This report on effort is an important piece of information for a teacher to have because in both of the examples that I just cited, the teacher might decide that the student had been given an inappropriate assignment. If a student can easily complete a task with minimal effort, it may have been a waste of the student’s time to actually do the assignment. On the other hand, a student who invest a lot of time, energy and effort into a task without seeing any result or gain from the effort they invested, may not have been given the appropriate task. As you engage with your learners in a conversation about their effort, either debriefing some task that they finished or planning for some future task, I’ll give you four elements that you can consider building into your conversation. Time, perseverance, patience, and repetition of success. Time, how much time I spent on something is often an indicator of effort. It’s rare that you can put forth high effort in a short amount of time. Perseverance, perseverance is often indicated by practice and repetition.

Steve: 08:53 A learner may need a coach or a teacher to illustrate what one needs to practice. What are the learning behaviors that would lead to future success? In other words, what should I spend my effort on? Think of a piano or a swim teacher. Then, when I know what it is I need to do repetition sets in. It often isn’t fun or rewarding to repeat that practice, but it’s a critical part of learning. Sometimes, strategies can help a youngster as well as an adult with repetitions. Can I make it a game? Can I involve a social element? I find it interesting that my duolingo account has other people that I don’t even know, send me encouraging messages from time to time about the practice time, the repetitious time that I’ve spent in learning. Patience is often another indicator of effort or a needed element for effort to occur. And patience is needed because frequently our initial effort provides no positive feedback.

Steve: 10:15 Sometimes effort is trial and error, and it requires constant do-overs. I’m reminded of a gifted student that I had early in my teaching career and almost everything that we did in the classroom engaged in learning came very quickly and easy. His name was Danny and our school had a swim program for kids as part of our physical education class and Danny avoided the water and it took quite a bit of encouragement. And Danny’s first day that he showed up with a suit and entered the pool, I saw Danny at least holding his nose and putting his face in the water. When I gave Danny feedback after our class at the pool and told him I was proud of him and what I had observed, Danny shared with me that he was disappointed.

Steve: 11:17 And when I had ask of why he told me he had read the night before how to swim, and he had tried it today and it didn’t work. That was a shocker for Danny because he wasn’t used to having to put the kind of effort into learning something new, having so many experiences in my classroom where learning came rather easy to him. And the last element is one that we often overlook. And it is that one of the indicators of effort is continual practice even after success. You see, that continuous successful practicem now solidifies the learning. Consider the videos you’ve observed of skateboarders who fall countless times, and then suddenly success. Immediately after that success, they’re back up and rehearsing and practicing the same stunt over and over because that repeated practice solidifies what it is that they figured out and learned. As with many of the skills I’ve shared in these parent podcasts, modeling and sharing your experiences is an important part of the parenting strategy. Talk about your investment and effort. When do you invest minimal effort because the task is easy or the outcome isn’t that important or critical? When does making dinner get a ton of effort and when is making dinner simply heating something up? What influences that decision? Feel free to drop me a thought or a question at barkleypd.com. I’d be happy to follow up with you and address anything you raise in a in a future podcast. Thanks for listening. May your efforts be rewarded.

Steve [Outro]: 13:24 Thanks for listening in folks. I’d love to hear what you’re pondering. You can find me on twitter @stevebarkley or send me your questions and find my videos and blogs at barkleypd.com.