Podcast for Parents: When Is a Rigorous Program What We Want for Our Students? When Isn’t It? - Steve Barkley

Podcast for Parents: When Is a Rigorous Program What We Want for Our Students? When Isn’t It? 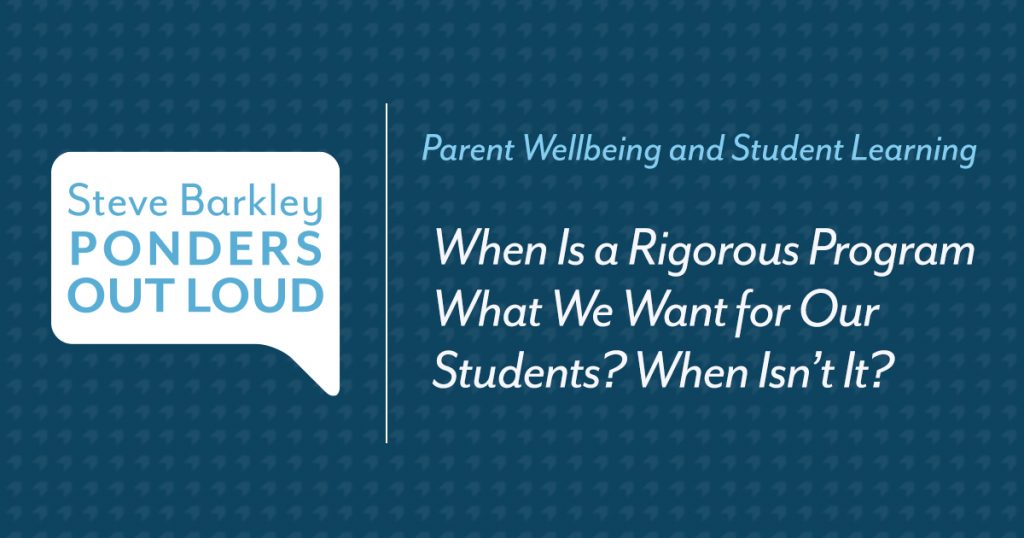 What signs signal us as parents that the “rigor” level of our child’s program may need an adjustment? What conversations should parents be having with school staff about rigor? How do we encourage programs that develop well-rounded people who impact the world? Two heads of schools share their experiences.

Read “The Dark Side of Rigor” article here.

PODCAST TRANSCRIPTSteve [Intro]: 00:00 Hello, and welcome to the parents as learning coaches edition of the Steve Barkley Ponders Out Loud podcast. Parents and caregivers play many different roles, at times, even somewhat conflicting roles as they support children’s development. The pandemic has shown a light on the importance of parents supporting learners. In this podcast, I’ll look to share my experiences as a teacher, educator, parent, grandparent, and continuous learner that can support your coaching efforts.

Steve: 00:33 When is a rigorous program what we want for our students? When isn’t it? Joining the podcast today is Ole Jorgensen and Percy Abrams, who are heads of independent schools and they’re the authors of an article titled, “The Dark Side of Rigor.” Also they’re parents so I was anxious to have record a piece for the parent listeners. Guys, what’s the common definition that people have for rigor?

Ole: 01:04 Thank you for the opportunity to share. I think what we hear around here in Silicon Valley is that a rigorous class is a hard class and hard oftentimes becomes identified at least by parents, according to the workload, the level of competition for grades, the extent to which kids have to work and sacrifice and manage stress and anxiety to be “successful.” So in that way, we’ve come to put student achievement above student
wellness because we’ve lost touch with what rigor should be.

Steve: 01:43 You talk about redefining rigor. Percy, can you talk w what that would mean to redefine it?

Percy: 01:51 Yeah. When I think of redefining our, I would say 20th century notion of rigor, what I would say is to not elevate volume – the amount of work that a class has in it. To not elevate high stakes testing, but really to elevate academic challenge, depth, inquiry, curiosity, and engagement in our curriculum. And there are plenty of ways to do that. You can do that by marrying what students are doing in the classroom with what this looks like in a real world context. So you can do that by insisting that a high achieving student spends time working with explaining and learning from a student who has not been as successful in the classroom. All of these types of group work activities lends themselves to an opportunity for the less achieving student to see the gifts and the skills and the attributes they have to bring to the classroom and ensures that the type of work that all kids are doing can be rewarding, interesting and fulfilling. And again, Ole mentioned this previously – we are not trying to do away with this notion that stress can lead to positive outcomes. It should not be an all encompassing thing that kids are experiencing in their academic environment.

Steve: 03:26 What might be a sign or an indicator to parents that the rigor needs needs a readjustment? I’m guessing that readjustment could go both ways, but what’s a parent finding out at home that would cause them to to raise this question with a teacher, with an administrator at a school?

Ole: 03:51 I think there’s some pretty clear indicators based on research that parents can look out for. Teens today are sleeping less than ever before. And that has been a significant precipitous decline in the past 15 years. Research supports that. So how much is your child sleeping? How much time are they spending staying up late working on homework assignments? We see steep increases across the country in anxiety disorders, clinical depression, instances of self-harm, eating disorders, and of course worst of all, the escalation in suicidal ideation or attempted suicide. But the markers for most parents really is the extent which your child is not getting enough time to do the work that’s been assigned because workload now has been the measure of rigor instead of the depth and richness of the academic group.

Steve: 04:52 So it’s interfering with chunks of family life?

Percy: 04:59 I would say so. When we worked with Denise Clark Pope out of Challenge Success at Stanford, one of the things that she has said is you have to make sure that you are building a PDF, so playtime, downtime, and family time. Not only for your emerging adolescents and your elementary school students, but for high school students as well. So the extent to which there is a lack of playtime for the student, and I don’t mean organized sports, but for them to sit home and play board game with a family. Downtime where they’re doing pleasure reading and family time, just being around the dinner table talking about their day, I think is an indication that the lack of that is an indication that there may be an inordinate amount of pressure placed on the child for their academic pursuits.

Steve: 05:44 I pulled a line from your article that I’d like to like to use as we wrap this up, but you mentioned the need for schools and parents to be focusing on developing well-rounded people who will impact the world. And I saw that as such a powerful line. I was wondering if he explored a little bit with us?

Percy: 06:07 Yeah. One of the things that I talk about when I mentioned to prospective parents to the Bush school, what we’re trying to do is to create purposeful kids who are going to make a difference in the world. So one of the things that I think we know acutely, is that our students view their role in today’s world as one in which that they are having an impact beyond the self. So whether or not that’s around climate change, issues around social and racial injustice, they are acutely aware that they’re role is not to go out into the world and to exacerbate these issues, but really to try to find real-world solutions to try to solve them. And that is the work that we can and should be doing in our schools in order to give them a sense that the work that they’re doing now is not solely to matriculate into a highly selective college and university, then move on to a highly selective professional school, but really to take the skills and the knowledge that they have to impact the world around them.

Percy: 07:17 And the more that we are impressing upon them that A, that should be an aim and B, that they can actually affect change, I think we’re doing a great service for our children for the next generation of students coming into our schools.

Ole: 07:35 That’s really well said Percy. I would say to parents, you really can change all of this for your kids because particularly in independent schools, we are going to deliver on what the market demands. So to the extent to which massive amounts of homework, impossible tests, stress, competition, these things are what parents see as measures of rigor, then that’s what the schools will continue to deliver. You can make change happen in the schools where your children attend, whether they’re public or private, but especially in independent schools, because it comes down to your values. What do you value? What do you want from school, from your child’s school? If we believe to Percy’s point that the fundamental purpose of high school is college preparation and then maybe that college itself is vocational preparation for a career, then those high schools are
going to be shaped accordingly.

Ole: 08:34 They’re going to be competitive. They’re gonna divide the achievers from the non-achievers and and high achieving is going to equate to managing a workload because that’s one way to divide the two groups. But if we believe high school is in itself, the life of life for a teenager, a world of exploration, we can capitalize on curiosity and their idealism and their inflated sense of justice and all the things that make them adolescents and delightful to be with, then rigor becomes a vehicle for broadening students’ minds and teaching them to ask questions and question answers and developing those skills that are going to prepare them beyond memorization and recall and doing massive homework loads for what’s going to be called for in this century. So it really can change and it has to start with parents because that’s who we’re serving in our schools.

Steve: 09:37 Important parent/teacher school conversation that we need to cause it to happen from each one of the stakeholder groups. Well, guys, thanks so much. I really appreciate the the time. I knew when I read your article, this would be interesting and you’ve delivered, I’ll put your email address and the link to your article into the podcast so people can contact you directly.

Steve [Outro]: 10:16 Thanks for listening in folks. I’d love to hear what you’re pondering. You can find me on twitter @stevebarkley or send me your questions and find my videos and blogs at barkleypd.com.