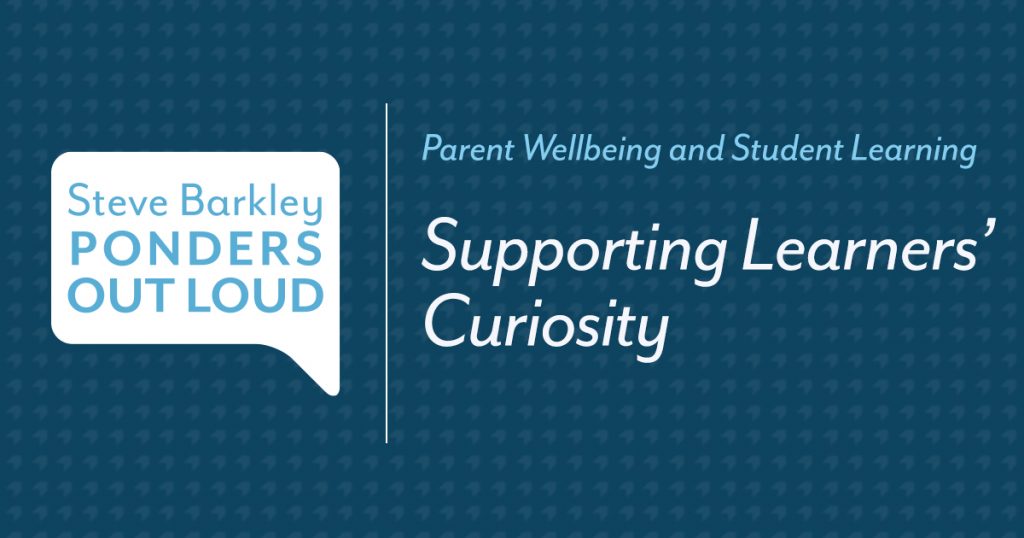 All children are naturally curious and our adult role is to provide an environment where children feel they can ask questions and get support for their explorations. Too often youngsters’ curiosity appears to not be valued as we get more focused on correct answers to questions raised by someone else.  How do we model the value and experiences of curiosity for our learners?

Steve [Intro]: 00:00 Hello, and welcome to the parents as learning coaches edition of the Steve Barkley Ponders Out Loud podcast. Parents and caregivers play many different roles, at times, even somewhat conflicting roles as they support children’s development. The pandemic has shown a light on the importance of parents supporting learners. In this podcast, I’ll look to share my experiences as a teacher, educator, parent, grandparent, and continuous learner that can support your coaching efforts.

Steve: 00:33 Supporting learners’ curiosity. Curiosity is having a strong desire to learn or know something. Folks who are curious often don’t need the information that they’re inquiring about. They seek answers to their questions for the sake of gaining the knowledge. Those who are curious may also actively seek out challenges and new experiences to broaden their horizons. That sounds like something we want to be sure our children can experience. Curiosity is a key ingredient to learning. It leads to knowledge, but also to the ability to make connections among various pieces of information. Scientific research supports the notion that our brains are wired for inquisitiveness and that when we seek answers to questions that we think are interesting, we’re actually better equipped to learn and retain the information. We’re also better at remembering the other material that we uncovered while we were on our quest for the initial answers.

Steve: 01:49 There’s a reason that you don’t forget things that you’re most curious about. Curiosity actually releases dopamine in the brain, a neurotransmitter that helps improve, noticing and affects attention and remembering. When your curiosity is peaked, you’re going to remember things more deeply. As parentsm it’s less important that we have right answers and more important that we can create an environment where questioning and learning are encouraged to occur. Hal Gregerson, a senior lecturer in leadership and innovation at MIT, describes why it’s so important for kids to have adults who encourage them to question everything. Listen to what he has to say.

Hal Gregerson: 02:44 These little children grow up. They’re full of questions. No matter where I go in the world, no matter where you go in the world, they ask a thousand questions. And when they go into school systems, sometimes it disappears. But before then, they question everything. Now that’s important. If there’s one gift I could give to any child in the world is to remember that phrase, question everything. And the reason why is because when Clayton Christensen who authored, “The Innovator’s DNA,” and Jeff Dyer with me, when we interviewed people like Jeff Bezos at Amazon, the founder of Amazon or Nicholas Enstrom, who found a Skype or Pierre Omidyar, who founded eBay, all of them basically questioned the world. And this is the way in which they were able to disrupt and change the world. And interestingly, they all had some adult in their life when they were younger, who paid attention to their questions. For Jeff Bezos, it was grandparents.

Hal Gregerson: 03:40 Every summer, when he lived on their farm in Texas, he would learn how to ask the right questions to fix problems on the farm. You had Orit Gadiesh, she was the chairman or really woman, but the chairman of Bain consulting group. She had parents who valued treasured her questions and every day they were asking her about the questions she was asking. And when she was a teenager, one of her teachers wrote in her yearbook, Orit, always, always ask those two or three questions because whenever a teacher would raise their hand and say, does anybody have a question whose hand would go up? Orit’s hand would all the time go up and she’d always have two or three questions and she always asks them. And the story goes on and on and on that innovators who change the world ask questions that disrupt the world.

Steve: 04:27 There’s an issue that I continually keep coming back to in my podcast for parents and it’s a common one that I’m putting in front of teachers, and that is, we need to model what’s important. And curiosity is no different from many of the other elements we’ve looked at in podcasts. Consider how you, as a parent model curiosity. I posted a link in the lead in to this podcast from a fast company article titled, “Eight Habits of Curious People.” I’ll label the eight here and consider how you model these with your children. The authors write, “while we’re born curious, experts say that we can relearn the trait. Here are eight habits of people who’ve retained their sense of curiosity. Number one, they listen without judgment. Curious people seek to understand the perspectives of others and are willing to sit in ambiguity, open and curious without having to get invested right away in the outcome.

Steve: 05:44 Number two, they ask lots of questions. Curious people ask questions that start with how, what, and when, why and they tend to avoid questions with yes and no responses. Number three, curious people seek surprises. While too much surprise can make us anxious, without enough surprise. We have a tendency to get bored, curious people, welcome surprise in their lives. Number four, curious people are fully present. Here’s a critical one for us to be able to model for our youngsters. We can turn off the cell phone and focus on our conversations with them. Number five, curious people are willing to be wrong. Curiosity causes me to seek additional information, information that may change what I’m thinking rather than continually seeking information to reinforce what I’m thinking. Number six, a critical one for us to do with our children. Curious people make time for curiosity. Curiosity often must be instilled intentionally.

Steve: 07:04 It comes from intentional pauses. Number seven, curious people aren’t afraid to say, I don’t know. Yeah, they’re those great times where our kids can ask us questions that we don’t know the answer to and our youngsters are actually the ones that are peaking our curiosity to seek a response to that question that they posed. And lastly, number eight, curious people don’t let past hurts affect their future. Curious people develop a strong base on our more apt to take risks.” I’ve said in several podcast parenting has a strong risk taking component to it in order for us to create the opportunities that our youngsters need. I’m going to close this podcast out by jumping back to the words of Hal Gregerson. Listen in as he suggests a strategy for creating what he calls four by 24, an opportunity to look to dedicate four minutes once a day, to paying attention, to questions, your questions and the questions of others. Here’s Hal Gregerson.

Hal gregerson: 08:35 One of the greatest gifts we can give to the people around us is the space and time to ask and answer questions. And that’s part of why I’ve been working with colleagues around the world, trying to launch the 4/24 project. Here’s the deal. How could we spend four minutes, every 24 hours to either listen to questions better or to ask more questions? The other one at school is that the average student in high school at school in an average sort of classroom asks one question per month that’s content related that’s not a question like “what’s going to be on the test?” But, “why is there air?” It’s a more substantive question. Those sorts of things happen once a month. It’s like they’re question brain dead. And mostly it’s not their fault. It’s because adults aren’t listening and frankly, adults aren’t asking very good questions themselves.

Hal Gregerson: 09:33 So if I want to get out of that as a four year old or a 24 year old, or a 44 year old, or a 64 year old, or even an 84 year old, here’s my suggestion. Today, spend four minutes paying attention to the questions that matter, your own or someone else’s. Because when a four year old asks a question over and over and over again, do you know why they’re saying it and repeating the question? It’s because from their frame of mind, they don’t think you heard them. They don’t think you understood them. And as soon as they finally get it, “ah, she understands me,” they’ll stop asking the question. That’s the point. So it might be spending four minutes listening to somebody’s questions, really listening. Mark Danioff found that a company called salesforce.com. I asked mark recently, how do you figure out to ask the right question in situations? He gave me a one word answer. Listen. More than your ears, listen with your heart because when you do, you really hear, and when you hear you’ll be able to formulate the right question to unlock a solution that nobody else has for a situation. That’s the key, listening to questions and asking questions.

Steve: 10:49 Consider taking on Greg’s challenge of 4/24. I hope that I’ve sparked your curiosity with this podcast. My curiosity is what led me to produce it.

Steve [Outro]: 11:06 Thanks for listening in folks. I’d love to hear what you’re pondering. You can find me on twitter @stevebarkley or send me your questions and find my videos and blogs at barkleypd.com.