I am currently attending the Learning Forward (NSDC) conference in Atlanta. I am presenting a session titled Verbal Skills for Heavy Coaching. 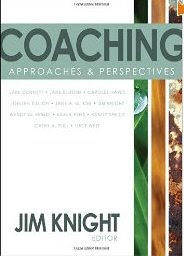 In an earlier blog, I discussed the definitions of light and heavy coaching as presented by Joellen Killion, Coaching Heavy and Coaching Light in Coaching: Approaches and Perspectives edited by Jim Knight.

Joellen states that Heavy Coaching requires high stakes conversation between coaches and ALL teachers that focus on teaching and learning.

She lists Coaches’ Beliefs that can Interfere with Coaching Heavy and their side effects.

I have seen coaches struggling with several of the seven beliefs from her list.

The work of coaches is to support teachers.

I have begun questioning what coaches mean when I hear that statement. My suggestion to them is that the job of the coach is to change teachers (Build Capacity/ Continuous Growth). As coaches are assessing “how their time is spent,” looking for teacher change causing increased student learning should be the goal. Just this week I was working with high school math coaches who were pulling students and providing scaffolding background for missing skill sets. They struggled when I asked them how the teachers would be changing/growing from their work. These coaches are working in several schools. They are very busy and working hard. Yet it will be difficult to show teachers becoming stronger from their work. I often find that these support activities are initiated to generate a sense of coach as a team member but have a way of becoming time consuming and comfortable.

Coaches can’t impose on teachers because they have no supervisory responsibility.

This has to begin by checking your meaning of impose: (2) to force (oneself, one’s opinions etc) on a person The headmaster liked to impose his authority on the teachers.

I guess if you take this definition, coaches do not have the positional authority to force a teacher to change. However the coach’s position to ask questions, present observational feedback, review student data, and model possibilities can impose “brutal facts” upon teachers. Coaches are in a position to make teaching a more public act. Using coaching conferences, professional learning communities, team meetings, and professional development coaches can impose a continuous teacher reflection of beliefs and decisions.

This week a coach shared that teachers are continually asking her to model instructional strategies in their classrooms. As soon as she offers to return and coach the teacher as she implements the practice, she is told,”No need. I’ll call you if I have a problem.”

When asked what she should do, I said let them know up front that you only model when there is a pre-agreement that you will be returning to coach. Design an observation form for the teacher to use during the modeling and return using the same form as the teacher practices. If asked why you impose that requirement, point to the research. The likelihood of change in teacher occurring from modeling alone is too small.

Coaches are not responsible for what teachers do.

I have often confronted this belief when doing initial coaching training and have suggested that the responsibility for “what teachers do” needs to be part of the coach’s job description. I have tackled this through the general concept of a “coach”. Coaches are evaluated by the performances of the people they coach. In too many schools, coaching has been introduced as an “invitational” activity. Coaches only work in classrooms they have been invited into. Administrators need to create an expectation among the staff that the coach is an investment the system has made in our school. It would be difficult to explain that professionals wouldn’t take advantage of that resource. Coaches should be working with grade level teams, departments, and PLCs to assume their responsibilities for “what teachers do.”

I suggest you pull Joellen’s beliefs list and use it with your faculty to explore everyone’s beliefs about the outcomes and responsibilities of your coaching program. 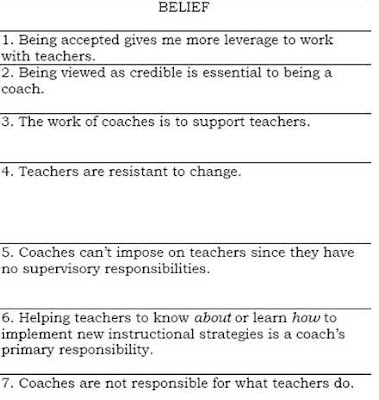 6 Responses to “ Moving to Heavy Coaching ”