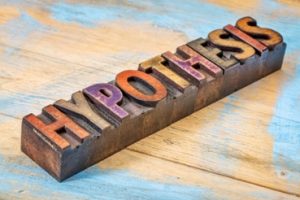 I have written blogs and posted podcasts on building teachers’ professional growth plans and professional learning community goals around hypotheses and evidence collection.

I was initially pointed in that direction from an article by Jean Ross, in the Sloan Management review from MIT, “Why Hypotheses Beat Goals.” She suggests that instead of asking “What is Your Goal?” we ask, “What is Your Hypothesis?” She states, “Hypotheses can force individuals to articulate in advance why they believe a given course of action will succeed. A failure that exposes an incorrect hypothesis can more readily convert into organizational learning.”

Learning. That was the word that I knew should be our focus. Organizational learning; even better. My experiences illustrated that too often goals that were met or not met, didn’t produce individual or organizational learning. Ross described an example from 7-11 stores in Japan. Sales clerks were asked to form a hypothesis about what to place for sale on their shelves that would increase sales and profits. Counselors checking back asked three questions:

Data was important for the clerks to learn from their process.

As I explored hypotheses in professional growth plans, I realized that the collection of evidence was critical for reflection that would lead to learning. Learning, even if the hypothesis didn’t achieve the desired outcome.

Here is a teacher’s hypothesis:

I think that students persevering and attempting to solve a problem when it appears to be “something they don’t know how to do” would result in increased math results. Providing increased experiences in solving problems collaboratively and independently should create this mindset.

I will create some time each week to engage in a “problem-solving event.” I’ll look to create a game-like/fun-challenging atmosphere around the activity. Students will be encouraged to find or create challenges for classmates.

The evidence she is planning to gather:

I have been encouraged that the collection of evidence throughout this process creates the reflection that will promote teacher learning and growth. These experiences being shared among staff provides continuous professional learning. Too often in the past, the only evidence collected tended to be whether or not the outcome goal was achieved. That limited reflection and insights. Collecting evidence on changes the teacher implemented and how students’ learning behaviors changed promotes reflection and learning. It also sets the process for modifying the plan along the way as insights emerged.

While I have been sharing and describing the possibilities of those modifications along the way, I think a new insight is emerging for me. Iterations! Professional growth plans for individual educators as well as PLC teams should probably build in the expectation that the plan is an initial iteration. There is an expectation that learning, from success or failure experiences, leads to the next iteration that uses the initial learning to create increased success.

In the first 3 minutes of this video, Simon Sinek illustrates why innovation or progress requires failing. “If you aren’t failing, you probably not pushing very hard.” In other words, there isn’t much challenge to what you are looking to make happen.

Sinek suggests that we might replace the word failure, since some people relate it to catastrophe, with falling. When learning to ride a bike, you don’t fail but rather fall. And get back up and go again. Next iteration. In their book Empower: What Happens When Students Own Their Own Learning, Spencer and Juliani suggest replacing failure (noun) with failing (verb). Failure is permanent and failing is temporary… part of a process.

I think I am ready for the next iteration of a professional growth plan design. Up to this point, I have been sharing that as one gathers evidence while implementing the plan based on the hypothesis, there may be discoveries that lead to modification. I am now thinking that an expectation for iterations is built into the plan. As teachers shared iterations with their colleagues, they would be exchanging their insights and triggering shared learning. Teachers engaged in the process would be experiencing a learning approach that we want for students.