Reggie Rivers, a previous NFL player and now motivational speaker shared the following in a TED Talk , If you want to achieve your goals, don’t focus on them. That’s a different approach than most of us are used to hearing, but his explanation makes so much sense. He explained that it is not the focus on the goal that causes you to achieve it. It’s the focus on the behaviors.

He added, “Goals are outside of your control, and behaviors are in your control”. That rang true to me. Several years back I had been working to lose some weight: a goal that I had for quite some time and where I had made very little, if any, progress.

When I began working with a counselor, she had me refocus from the goal to a set of behaviors. My attention was on the record keeping of the meals that I ate and the calories within those meals. It was to set a specific behavior of exercise and then to record that I had carried out that exercise, and key to the focus of the counselor was to stay off the scale. Matter of fact, she limited me to only get on the scale once every three weeks. Instead, at the end of each week I celebrated that I had executed the required behaviors.

I’m guessing many of you have had a similar experience. You carried out the appropriate behaviors for a week, and then you got on the scale and saw that there was no change in the outcome from that week of carrying out the correct behaviors. At that point, you head out for a grand slam breakfast, figuring your effort for the week was wasted. It dawned on me that the same thing frequently happens for our students. We work with students to set goals, and then we aren’t engaged with the students until it’s time to check back in on an assessment to see whether the goal has been met. 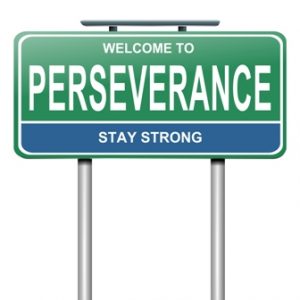 How could we increase student perseverance in math problem solving?

Many students have a belief that being good at math means that you can look at a problem and know how to do it and can then quickly do it. The reality is that being good at math means that when you look at a problem, you have an approach to take. You have a problem-solving process. You have a set of questions that you begin to ask yourself when you look at the problem — an approach to analyze the problem. While working on a problem, there may be a spot where you get stuck. At that point, you need strategies to use when stuck.

I recall meeting an elementary student in a school that was focused on improving writing.

The student shared his writing folder with me and mentioned that he had a goal of moving his writing score from a 2.5 to a 3.0. I asked the student, “What do you have to do in order to move from a 2.5 to 3.0?” He quickly pointed out that he needed fewer punctuation mistakes, and he needed a more varied vocabulary. I told him it was great that he knew that, and then I asked him, “What will you do to make that happen?” He said, “I have no idea.” In effect, he knew the outcome of a 3.0. He knew what it would look like when he got there, but he did not have the student production behaviors to put in place to bring that about. It’s difficult to persevere when you don’t know what to do!

I told him he needed production behaviors to achieve his goal. I suggested he ask the teacher for a list of all the places that commas are used, put that in his writing folder and after each draft check the list for the first place that commas are used. Do you have any examples of that? Look at the second place, the third place and the fourth place. Go down the list and check your draft for each of those elements. I’m going to guarantee you that if you do that on each draft for a month, you’re going to find that you begin to put commas in your original draft.

Take your draft to a classmate and ask her to pick three places where she thinks you could use a stronger word, a richer word, a more exciting word. Go back now and come up with a better word to put in those spots. Maybe go to another student and ask him to do the same thing and change those words. Again, I’m going to suggest that if you do that on each draft over the next month, you’ll begin to find yourself using those words in your original work. These behaviors will lead to you achieving the goal.

Perseverance is not a long race;
it is many short races, one after the other.

The same need to focus on behaviors to achieve goals applies to teachers. A professional learning community identifies a goal that they want students to reach. Then they plan backwards identifying student production behaviors: what is it that students will do that’s going to lead to the students gaining the outcome? Then they select the teacher behaviors that will assist the students in putting the needed student behaviors in place.

As a teacher I need to persevere.

Develop a plan for yourself and for your students to celebrate the execution of desired behaviors. Celebrate that you can document persistence in staying with the plan. That’s the initial thing to celebrate. If you do that, when you step on the scale and get the message you want, it will reinforce your beliefs about perseverance. That’s what drives you to continue persevering. We need students to persevere, and it’s only going to happen if we as educators capture that same level of perseverance.

One Response to “ Increasing Perseverance By Translating Goals Into Behaviors ”