Barnett Berry, from the Center for Teaching Quality, writing about teacher collaboration in an article in Kappan magazine,* describes teachers’ professional learning in Shanghai where professional learning is more peer-to-peer support than going to external trainings. Berry sites data from various reports that illustrates the missing peer collaboration in many of our schools:

# 7% of teachers claim their school has a strong collaborative model

# over half of American teachers have never seen a colleague teach 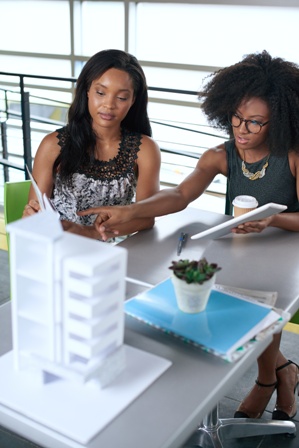 I had the opportunity to examine experiences and insights with a team of international teacher subject leaders and administrators after their first round of peer coaching conferences with each other. I began the debriefing with these two questions:

Often being coached or coaching can create some uneasiness or discomfort, describe feelings you encountered in both roles?

The shared responses uncovered the following:

Those who were paired with someone they had a working relationship with experienced minimal discomfort. The less previous experience they had with the person the more discomfort was generated. Some found discomfort in the coaching role as they were inexperienced with guiding a pre-conference conversation and unsure how much to share in the post conference.

One teacher shared that he mistakenly changed the lesson to something more “special” and thus lost the chance to receive feedback on his “normal” teaching. While most admitted to limited vulnerability by selecting a “safe” element for observation, one teacher had invited the coach to his most difficult class.

Next we examined the benefits of their peer coaching experience. 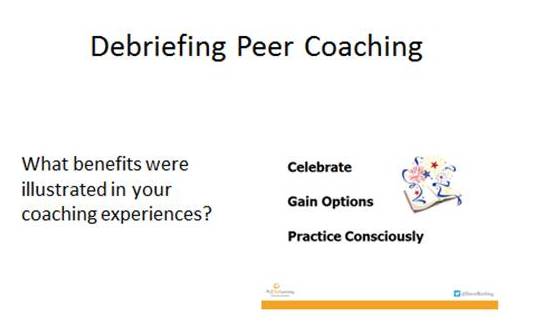 Increased options or strategies were reported as a benefit from nearly everyone. Most found this in their role as coach. While observing the lesson for the teacher’s focus, they spotted elements they could use in their own classrooms. Increased self-reflection was reported along with an increased sense of professionalism. Some teachers valued getting to know another staff member better and appreciating the power of another’s teaching. Teachers appreciated seeing students from their classes in another setting as well as seeing students from the previous year or the coming year. I read all of these as indicators of an opportunity for increased collaboration in extending student achievement.

Next we compared cost to payoffs. 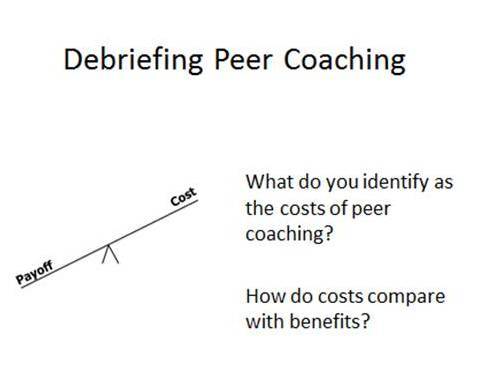 No surprise. Most common cost was time. While the administration had provided necessary coverage for these initial experiences, teachers felt the time pressure of preparing for what a coverage teacher would do and following up on it when they returned. Also, while no one used the word, I interpreted some sense of guilt i.e. time that my students lost or time that the coverage individual lost.

These initial coaching sessions were somewhat stilted in order to gain experience so the lack of purposefulness of outcome tilts the cost/payoff balance in favor of costs.

I closed the debriefing with these questions:

To what extent do you believe we should invest in creating a culture and practice of coaching in our school? Why?

What do you think should be our next steps?

What role would you be willing to play in creating a coaching culture and practice?

There was a resounding “yes” to the belief that the group should invest in building a culture and practice of coaching. There was unsureness about how best to address the time problem. Someone suggested that the next step might best be for the teacher subject leaders to invite teachers to coach them as a low risk initiation.

My meeting with the School Leadership Team (SLT) led to this approach:

#1 After creating a list of some key themes for coaching, teacher subject leaders will invite teachers to coach them and if teachers are interested, the leaders will reciprocate and coach the teacher. SLT members will provide any needed coverage for these coaching observations.

#2 A small design team made up of teacher leaders, SLT members and volunteer teachers will work to design strategies and scheduling options that support increased coaching opportunities.

An important component in this process is to see the focus as one that wishes to create an increased collaborative culture where peer coaching is a tool rather than seeing the coaching as the outcome.