Should students know their CPA as well as their GPA? 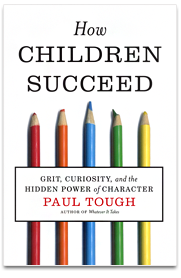 I’ve just finished reading How Children Succeed by Paul Tough, where he poses:

“If you were a college-admissions director or a corporate human resources manager scheduling entry–level employees, wouldn’t you like to know which ones had scored highest in grit or optimism or zest?”
“If you were a parent, wouldn’t you want to know how your son or daughter stacked up against the rest of the class in character as well as reading levels?”

Reporting on work done at KIPP Academy middle school in South Bronx (mostly students from low income Black and Hispanic families) and the Riverdale Country School (tuition starts at $38,500 for kindergarten), Tough shares a list of character elements the two schools chose as a focus.

These seven were chosen from a list of 24. When asked if these traits can be taught, Tough answers, “I do think they can be taught in the classroom – I think most of us can think of a teacher in our past who helped us develop one or more of those skills”.

You can view a panel discussion with Tough and others from the book here. NBC News Education Nation: Can Character Be Taught?

The work of Martin Seligman and Angela Duckworth (see earlier blog on grit) feature strongly in this work on character. Tough quotes Duckworth on her view that we need to look at the students as well as the schools when addressing school reform:

“Learning is hard. True, learning is fun, exhilarating and gratifying—but it is also often daunting, exhausting and sometimes discouraging…. To help chronically low- performing but intelligent students, educators and parents must first recognize that character is at least as important as intellect.”

Reading that quote, I found it interesting (based on my recent blog about working or learning) that Duckworth didn’t say learning is “hard work”…. learning itself can be hard.

Dominic Randolph, the headmaster at Riverdale, shares an interesting dilemma; “The best way for a young person to build character is for him to attempt something where there is a real and serious possibility of failure. The idea of building grit and building self–control is that you get through failure.”

To be successful you need to learn how to fail.

This past week I was engaged in a discussion about grading with high school teachers. One conversation concerned whether character (effort) should be included in assigning grades. The struggle is that teachers want to recognize and applaud  effort yet know that in a grade it confuses the clarity of the academic standard achieved. Perhaps a character report card, or profile, or at least conversation could be a solution.

I believe discussions identifying character traits teachers wish to develop (and how to develop) are worthwhile coaching, PLC, or faculty development activities.