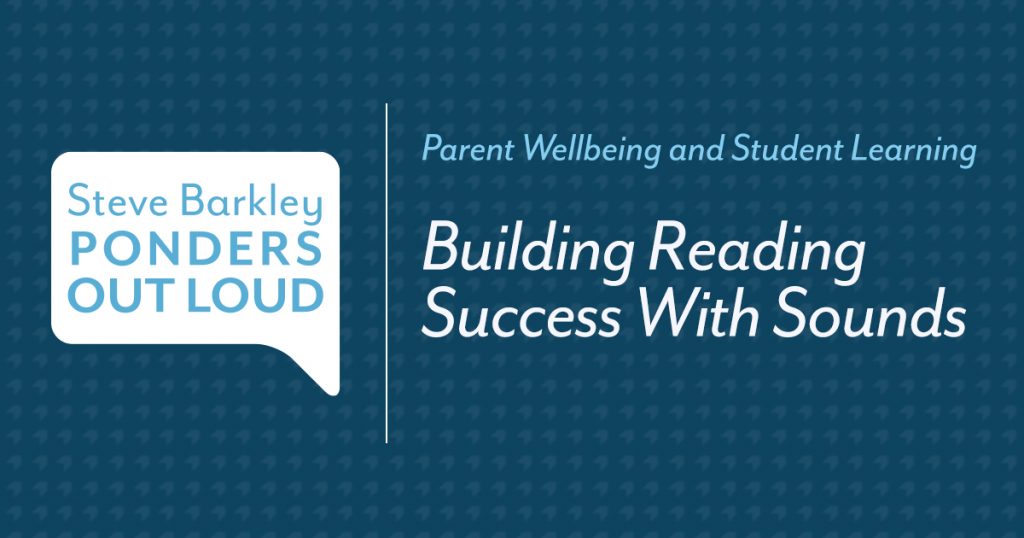 Watch an episode of Sounder and Friends here.

Find the free App and other resources on the Sounder and Friends website.

Steve [Intro]: 00:00 Hello, and welcome to the parents as learning coaches edition of the Steve Barkley Ponders Out Loud podcast. Parents and caregivers play many different roles, at times, even somewhat conflicting roles as they support children’s development. The pandemic has shown a light on the importance of parents supporting learners. In this podcast, I’ll look to share my experiences as a teacher, educator, parent, grandparent, and continuous learner that can support your coaching efforts.

Steve: 00:52 Tell us a little bit about Sounder and Friends and your motivation to to produce it.

Heather: 00:58 I would love to. So as you mentioned, Sounder and Friends is an animated educational adventure series and now is a free app that focuses on the most important early reading skill that most parents have never even heard of. And that’s a skill called phonemic awareness, which is the ability to hear and to play with the sounds in spoken language. So let me give you just a couple of examples. If I were to say the sounds, D-O-G, you could blend them together to form the word dog, and that’s called phonemic blending. If I said the word, C-A-T, you could pull apart that word into the sounds cat, and that’s referred to as phoneme segmentation. Phonemic blending and segmenting are the skills that are are associated with those early stages of reading development when children are reading by sounding out and spelling by sounding out. Another important skill is called phoneme substitution.

Heather: 01:54 So if I asked you to change the sound A in the word whale to the sound E you would have a wheel. And being able to substitute or delete and words in spoken words, is a skill that’s associated with reading fluency. So as I’ve just demonstrated, phonemic awareness has nothing to do with letters or with printed words. Even so, it is the most powerful predictor of a child success in learning to read, even more so than a knowledge of letter names and sounds. And every parent I know knows the importance of teaching children their ABCs. I’ve had lots of opportunities to witness parents doing that, which is wonderful, however, phonemic awareness is actually even more important. So early on in my teaching career, I learned about the importance of phonemic awareness and my teaching partner, Laura Robbins and I, developed a series of games to teach our students these skills.

Heather: 02:47 And what we found was that children loved playing with words in this way. And even more importantly, they had great success in applying those skills to their reading and spelling. And when we talked to the parents of our students about these concepts, they immediately understood the relevance to literacy development. But somehow in the broader community, no one had ever heard of it. And unfortunately, certainly back in those days, not all teachers were teaching those skills to the level of proficiency that was needed for fluent reading. So Laura and I decided to make it our mission to help young children develop these skills in a fun and playful way, and to help the adults in their lives develop that understanding of the importance of it. And it’s our belief that if children begin to develop these skills before reading instruction begins in earnest, then that instruction can be productive and children can experience success right from the start. So that’s what Sounder and Friends is all about. It’s about teaching reading right, right from the start.

Steve: 03:47 Heather, as I’m listening to you, there’s a question going through in my head, so straighten me out if I’m off on it. But it kind of sounds like hearing the sounds different – is that the earliest stage or it’s a critical step that happens as well as being able to see it and reproduce it?

Heather: 04:10 Right. It is a critical step that happens. And it develops in parallel with knowledge of letter names and so forth. And so initially, and in order for children to be able to sound out words, to read them or pull words apart in order to spell them, that’s when children need those basic phonemic awareness skills. And then those skills can be further developed through reading instruction, especially reading instruction that really attends to those letter sound combinations. So, we’re not going to necessarily teach them completely separately. We want those two things to happen in parallel, but there are many children with deficits in what we call the phonological component of language, meaning they have difficulty hearing. When I say the word cat, they hear it as sort of one big sound chunk.

Heather: 05:03 And I like to correlate it with, for example, I am nearsighted. So when I look out at my neighbor’s house, I see the sea of red. I’m not able to, until I put my glasses on, see those individual bricks that make up that big house. So children hear this big chunk, but they aren’t necessarily able to tease apart those individual phonemes. And of course, written language is actually built on using letters to represent those individual sounds in spoken words. So unless we have an understanding of the sounds, unless we can hear them and pull them apart, then we’re not able to use letter symbols efficiently to be able to represent them.

Heather: 05:57 Certainly. And Steve, I love that you used the word explore because that’s what we wanna encourage young children to do, to really explore those sounds in our spoken language, by listening and identifying the sounds and also by noticing what it feels like to produce those sounds. So often as parents and as skilled readers, our first instinct is to draw children’s attention to the letters and words. But we need to realize that the order of letters in the word really has no meaning to a child unless that child is able to hear and identify the corresponding sounds in that word. So I’ll give you a quick example. I was at the grocery store recently and I saw a mom pushing her young son in a grocery cart
through the dairy section, and she stopped and pointed to a sign that read milk. And she said, look, M-I-L-K, that spells milk.

Heather: 06:45 And my first thought was, isn’t this wonderful, that’s phenomenal. This mom really cares about her child’s literacy development. She’s taking advantage of this teachable moment. And then my next thought was darn it, I wish I could just tell her about phonemic awareness because that interaction would’ve been that much more impactful if she had started by guiding her child to explore the sounds in the word. Let’s listen for the sounds in the word milk. What sounds you hear at the beginning? What sounds you hear at the end? What does it feel like to say that, “mmm” sound? Now let’s look for the letter that spells the sound “mmm.” So that’s one of the ways that we can really help children, if we pay attention or kind of privilege the sounds that we hear and then make connections to those letter sounds, we can really support young children’s reading development.

Heather: 07:36 Another really quick great game to play is I Spy. So instead of saying, I Spy something red, I can say, I Spy with my little eye, a house or a car and I’m going to encourage my child to shout out house or car. And then of course, once the children get the hang of it, you can encourage your child to spy something. And even if they don’t pull apar the sounds perfectly, that’s not important. The important thing is that we’re developing this love of language and promoting this awareness and exploration of sounds. Now for older children, it can be fun to play games that require identifying isolating or manipulating sounds. A game I like to recommend for second grade and above is called last to first.

Heather: 08:29 So I say word like tree, and then the child has to identify the last sound in that word, that would be the sound E and then think of a word that begins with that sound. So the last sound now becomes the first sound. So we go from tree, to E, to Eagle, and then it would be my turn to think of a word that begins with sound “Le,” which is the last sound in Eagle. So it’s a really great way to help children develop those really robust phonemic awareness skills that they need for long-term reading proficiency. And one of the things that I love about awareness games is that they can be played anywhere. You don’t need any materials. You can be driving in the car, you can be sitting and sitting at the doctor’s office or waiting at a bus stop. These games are lots of fun, they’re easy to play, and then they help children develop those skills that they need for reading success.

Steve: 09:16 Heather, I’m wondering if you could point out for parents of older students, some signs or signals that they might spot that would suggest their child is missing some of that phonemic understanding and be able to raise that concern with a teacher.

Heather: 09:35 Certainly. So one of the early predictors is rhyming ability. So if you notice that your student, once they’re beyond those early primary years has difficulty with rhyme, that can be an indicator. But students who have phonemic awareness deficits typically have difficulty with that automatic fluent word recognition. And there does come a point in time where I think we as adults tend to assume that children have reading ability and we let them read silently. But it’s really a good idea to make sure that your child reads aloud to you every so often, especially materials that are considered to be at their grade level. And if you’re noticing that there are a lot of misread words or that the child’s reading is kind of halting or hesitating, and it doesn’t sound natural, that’s a good point to talk to your child’s teacher about

Steve: 10:21 Thanks, Heather. Before we wrap up, tell parents where they can find Sounder and Friends and other resources that you have available.

Heather: 10:29 I would love to. So our Sounder and Friends episodes are featured on pbs.org and on the National Center For Improving Literacy’s Kid Zone. And you can just use Sounder and Friends as a search term. But the easiest way to find us is just to go straight to our YouTube channel, type in Sounder and Friends, and you can view our episodes. Or you can visit Google Play or the App store to download the free app. It’s called Sounder and Friends, The Game, and it should pop right up. We also post a lot of helpful resources, including games and activities on our social media platform so we would love for parents to engage and interact with us. Follow us on Facebook and on Instagram. And these resources are also posted on our website at www.sounderandfriends.com.

Steve: 11:15 Thanks, Heather. Appreciate it. I’m sure parents are gonna be searching and checking that out.

Steve [Outro]: 11:26 Thanks for listening in folks. I’d love to hear what you’re pondering. You can find me on twitter @stevebarkley or send me your questions and find my videos and blogs at barkleypd.com.