In recent weeks I have had the opportunity to conduct a substantial number of classroom observations with teams of instructional leaders and coaches. Our focus was on practicing observing student behaviors. In the “debriefs” we shared what we had observed. Where did we see behaviors that would suggest a strong likelihood that desired learning would occur? What student behaviors suggested that desired learning outcomes were unlikely?

We used this continuum to describe what we observed reading the class overall, groups within the classroom, and individual students. 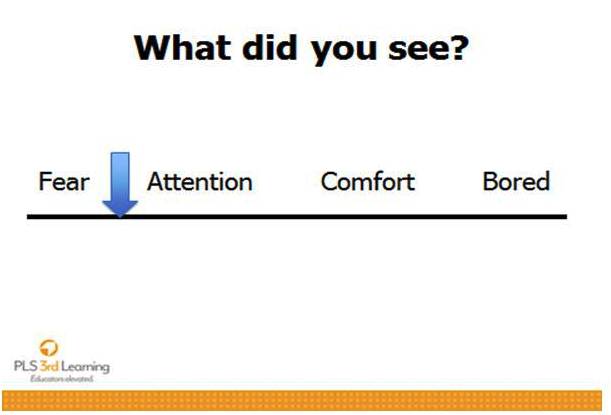 Learning is unlikely at the two ends of the continuum. While learning can occur across the rest of the continuum, the blue arrow indicates the “sweet spot” where we get the greatest learning occurring. It’s a high focused, “leaned in” learning, sometimes called just in time learning. (See earlier blog)

During these recent sessions I was asked to model a conversation with one of the teachers we had observed. I explained to the teachers that this was different from coaching as a pre-conference wasn’t held where the teacher could have focused my observation and feedback. Therefore, I suggested that we would model a conversation about learning behaviors. It was great to experience the teacher’s openness in many of these dialogues despite the public nature with observers. In some schools teachers not selected for the conversation requested an opportunity.

Here is a process I used to guide the interactions: 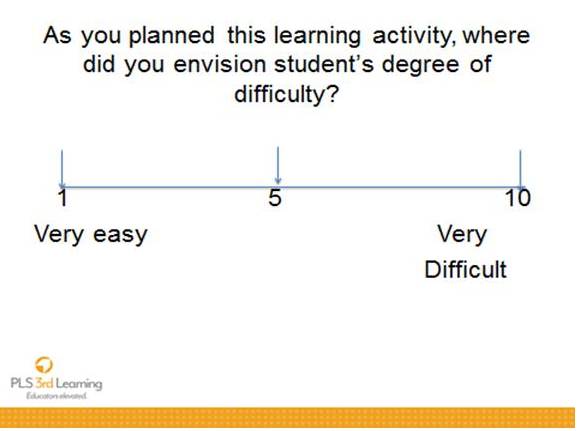 Many teachers described first where they felt most of the class would be and then pointed out individuals outside that range. For example a high school math teacher described that the class was probably between 5-7. She thought that 5 students (including 3 special needs) were at 9. She said one student was at a 1 and two were between 2 and 3.

For each group of students (common difficulty level) what are the most important student behaviors to have during the leading activity?

And then followed with:

What teacher behaviors are most likely to assist in getting the desired student behaviors?

In many of the conversations the teachers’ reflections uncovered that while the teacher knew the different needs of students, they insufficiently planned for the specific behaviors needed for all students to gain fully from the learning experience. When they discussed what the various learners needed to “do,” appropriate teacher strategies became evident. Frequently teachers realized that they had not been clear in describing the specific student behaviors that they wanted from students:

One teacher wanted students to approach an assignment by referencing a vocabulary note sheet they had previously prepared and working with a partner using the academic vocabulary while discussing the appropriate answer and then request teacher help if needed. When the teacher identified that most students called her for help as soon as they were unsure, she realized she had not stated clearly, not alone hadn’t modeled the behavior she wanted students to use.

Often the teacher gave a task to the whole class and didn’t inform certain students that they were to approach the activity differently. While the activity was a simple “review or check” for a few students they assumed they had the same time to complete the task and as the rest of the class and drifted at a very comfortable stage through the period. Meanwhile struggling students thought they need to complete the entire assignment and worked to “get answers” rather than deeply engage in learning.

When I used this strategy in a pre-conference with a beginning teacher, she quickly informed me that she had no idea where her students would be on the difficulty continuum. That then lead to the realization that her learning activity had to include an opportunity for her to assess their readiness to plan future instruction.

I’d appreciate your feedback if you use the continuum in an upcoming teacher conference.