A Time to Be Really Listening 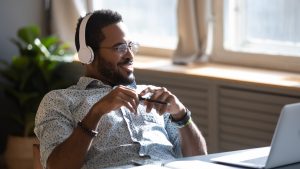 Listening has always been a critical skill for effective coaching. I’ve connected it with questioning skills. Too often when coaches are conscious of questioning, they can get too focused on creating their next question and not really listen as the teacher responds. The pause after a teacher speaks is the time to consider how I will respond. Sometimes a coach’s desire to be “helpful” has one looking for a solution or an improvement to move toward and thus miss hearing things that are important to the coachee. This can create an understanding gap. Following the teacher’s thinking can increase the teacher’s reflection and vulnerability leading to insight and growth.

The importance of listening was reinforced by Melissa Cournia on a webinar from LearningForward, Learning from Coaches: Supporting Coaches in a Virtual World. Melissa, an instructional coach, at Bismarck High School in North Dakota shared the following about her Instructional Support Team:

What we are doing most is listening. We are listening to…

In The Leader’s Guide to Coaching in Schools, John Campbell and Christian van Nieuwerburgh describe eight key coaching skills; three of which I think closely connect to listening.

In training for coaches, I often combine an examination of questioning skills with conscious practice of confirmatory paraphrasing.

The Confirmatory Paraphrase is a statement rather than a question. After paraphrasing facts, feelings or thoughts, the teacher will usually confirm whether your interpretation is on target by answering “yes” or “no.” Our expectation with Confirmatory Paraphrases is to get a “yes” response, indicating that our understanding is accurate. A “no” response indicates that the interpretation was off and the teacher can add new information to produce understanding. Note that making your tone of voice go up at the end of a statement makes it sound like a question. The Confirmatory Paraphrase is not a question; it’s a confirmation… a statement. (Building Communication and Teamwork, PLS3rdLearning)

There are three keys to forming a Confirmatory Paraphrase:

Here are a few introductory phrases to guide you when you create a Confirmatory Paraphrase.

Teacher: “It’s frustrating to put so much time into planning and preparing an online lesson and then have students not carry out the tasks and some not even log on.”

You are spending a lot of time preparing for virtual lessons.

There are numerous students not logging in for the synchronous activity.

You are disappointed with the outcome.

You are worried about how to proceed.

You think your planning time was wasted.

You sense that students (maybe parents) are not taking enough responsibility

You believe you need a different approach to designing the lesson.

I find that increasing confirmatory paraphrases and asking fewer (especially closed-ended) questions in coaching settings increase the sense of conversation. Paraphrases invite a response while questions require a response. During conversation the coachee tends to add more information and do more reflection, leading to understanding one’s own thinking more clearly.